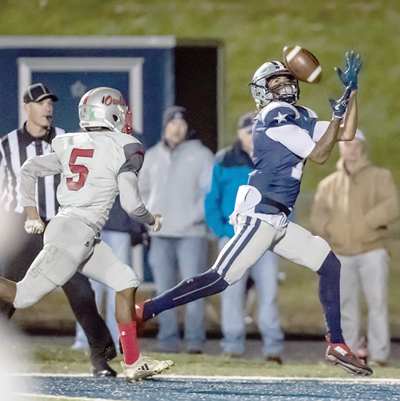 The Admirals used its second-round Class 6A playoff game versus Ooltewah as a warm-up for its huge state quarterfinal trip to Maryville, versus the mighty Red Rebels, this Friday night, Nov. 16.

Kyle Carter, senior running back, rushed 13 times for 114 yards and two touchdowns, including a 31-yarder to begin the game’s scoring.

“We were clicking on all cylinders together,” Carter said. “Give them credit, they have a great team. ... Our offensive line played great tonight, Gavin’s playing great football right now.

“We’re peaking at the right time.”

Isaiah Gibbs, senior running back, scored on a 14-yard run while hauling in a 12-yard TD reception. “We had a good gameplan coming into this game,” he said. “We found ways to attack their defense on the perimeter, and then run up the middle.”

Farragut now has won 21 straight home games, and is perfect in the three full seasons playing on the “Haslam-Pilot” artificial surface at Bill Clabo Field.

“It’s great to leave that legacy my senior year with my teammates, my brothers,” Gibbs added. “It’s something I’ll never forget.”

“I’ve just been confident with myself. It feels good coming after a few good weeks of playing,” Wilkinson said. “We’ve been very consistent, having a lot of good practices throughout the week.”

“Our offense is really well-rounded, Gavin leads us very well and we have a great receiving corps and running backs,” Riley Overall, senior offensive lineman, said.

Senior Jake Evans, back-up QB who also plays in the secondary, ran 30 yards for a score.

About Farragut’s first string defense holding the Owls offense to 7 points, led by dangerous senior running back Sincere Quinn and elusive quarterback Kyrell Sanford, “We knew that they were going to be quick, and we knew we had to shut down their two all-stars, No. 1 (Quinn) and No. 7 (Sanford),” Parsons said. “I think we did a good job containing them. We contained them on the outside and held our own on the inside.”

Benji Cheatham, Alec Keathley and Caleb Kuhn each had five total tackles, with Kuhn’s and Keathley’s including two minus-yardage stops and Cheatham one.

“It was great to come out here and get that last win on the home turf,” Kuhn said. “Just to know we left that legacy here.”

“We knew they were their studs,” he added. “We were able to kind of hone in on those guys.”

“They were really athletic players,” Eli Purcell, FHS sophomore defensive end, said. “Our defense just held the gaps that we were supposed to. We did our jobs.”

“This week we really fought hard in practice,” Billy Seal, senior defensive lineman, said. “Coach (Eddie) Courtney was saying we had one of the best weeks of practice all season.”

Lucas, also a defensive back, grabbed an interception.

“I don’t think we’re going to treat this week any different,” Kuhn said about preparing for the explosive Red Rebels offense.

“I know we can hang with Maryville, there’s no doubt in my mind,” FHS senior guard Jake Rima said. “Last year is last year (38-6 loss during the second round of Class 6A playoffs). We’re a different team.”

“After they got a couple of big touchdowns on us (last year), we kind of gave up,” Seal said. “... That’s not what our team (this year) is about. We’re going to fight through to the end.”

“We kind of got hit in the mouth early, everybody kind of just fell apart,” Wilkinson said. “This team, I don’t think we’ll fall apart after everything we’ve been through with the ups and downs. We keep fighting.”

“It’s going to be about who makes the most big plays,” Carter said. “And who steps up when the game’s on the line.

“I believe we can make those plays.”