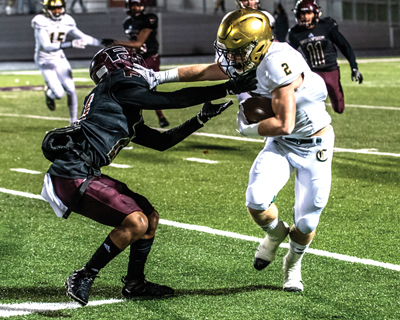 Taylor Shannon, Catholic junior receiver, tries to stiff-arm Falcons defensive back Kevin Johnson. The Irish won this second-round Class 5A playoff game 28-25.
KNOXVILLE — Throughout the 2018 season, Knoxville Catholic High School’s football team has battled more than its share of injuries. And when Adam Jones and Jack Jancek were injured, both thought their respective seasons were over.

Both Jones and Jancek made big plays to help the Irish outlast Fulton 28-25 Friday night, Nov. 9, at Bob Black Field, in a second-round Class 5A playoff game.

“When he got hurt in Week 2 and I got hurt in Week 3, we thought our seasons were over,” said Jones, a senior wide receiver and defensive back. “Fulton is a great team and they always challenge us and it feels great to come over here and win this game.

“Now, we have Oak Ridge next and that game will be at their place.”

Jancek, a junior quarterback who also plays in Catholic’s secondary, said the win was big for the Irish (8-3).

“This is just amazing,” said Jancek, who threw for two touchdowns, ran for another and had a key interception on defense. “They’ve got a really good team.

“Tonight, we wanted it more and we went out and we got it.”

Jancek and Catholic got the upper hand early.

After the Falcons (10-2) went three-and-out on their first possession, the Irish engineered an 11-play, 59-yard drive that resulted in a touchdown when Jancek connected with Stiles Moore on a 13-yard touchdown pass. Paxton Robertson’s extra point gave Catholic a 7-0 lead with 4 minutes, 22 seconds remaining in the first quarter.

The Falcons, however, would answer and pull ahead. Xavier Malone had a 21-yard scoring strike to Amir Johnson to tie the game and DeShawn Page had the go-ahead score on a 6-yard run to make it 13-7 with 1:56 left in the opening frame. Fulton missed the PAT after its second touchdown.

The Irish took a 14-13 lead midway through the second quarter when Jancek threw a 32-yard scoring strike to Jones, which gave Catholic the advantage it enjoyed at halftime.

“Both of those guys are great players and both of them came up really big for us tonight,” Matthews said. “This was a huge win for us. We’ll celebrate it until midnight and then we’ll move on and get ready for Oak Ridge.

“I’ll be playing against my high school coach (Joe Gaddis) and we know each other well. There won’t be any secrets,” he added.

Freshman running back Keondre’ Jarmon scored the eventual game-winning touchdown on a 4-yard run, making the score 28-19 with 4:45 left to play. Jarmon played despite a broken thumb he suffered in the first round of the playoffs.

Fulton did pull to within 28-25 on Johnson’s second TD reception with 1:22 to go, but Catholic’s Taylor Shannon, a sophomore, recovered the ensuing onside kick.

“This feels great,” Shannon said. “We knew this would be a tough game and now, we just want to go back to state.”