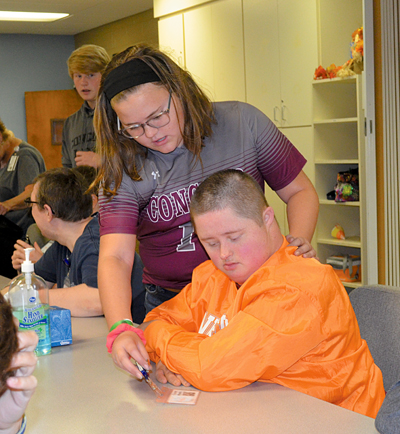 While she had long hoped for some connectivity with the students next door at Concord Christian School regarding that program, she did not realize CCS Middle school principal Amanda Lane had a similar thought.

“I had an idea in August to see how students could be helpful, and learn to serve in the community,” said Lane, who involved her rising eighth-grade students in the collaboration process. “We started talking about service, and what God wants from us.”

One of the students suggested reaching out to the Helping Hands ministry — serving special needs adults — as several had worked with it as fourth-graders in what has become an annual local mission focus for that grade group, which raises funds for Helping Hands participants to attend summer camp.

“I had a vision, on how the adults could interact with the students on a more regular basis, after my daughter worked on the fourth-grade summer camp project” several years ago, said Knudsen, who added, “I wondered what we could do to actually develop relationships?”

So when Lane approached Knudsen about it, “I had no idea that God was working with Diane, to give her a vision, on how to bring that together,” Lane said.

“It is interesting to see the Lord work in the two places together and how the pieces came together,” she added. “I didn’t know if anyone wanted to do it.”

However, participants quickly signed on. Lane had limited this first collaboration to eight students, and enthusiasm was so high she had to turn some away.

The students now meet with Helping Hands adults on a weekly basis during the school’s elective class time, which offers options that include band, chorus or art among the choices.

“We told them from the beginning if they didn’t feel comfortable with it, they didn’t have to (be part of it),” Lane said of what is a volunteer effort. “We wanted to make sure if they did it would be because of what God has been doing in their lives.”

Lane said it was very important to ensure the collaboration was “kid-initiated,” but equipped the students by educating them fully regarding disabilities and how best to interact with the adults.

“We prepared them, but they really looked at what to do and how to make sure everyone feels valued and important,” she added. “It was about more than just being a friend.”

“Service is a relationship too, and showing the love of Christ by just being there,” Knudsen said. “It is very powerful if you do that.

“I think the students have come to appreciate how people are differently abled and have a greater appreciation for them,” she added. “And they have really enjoyed it too.”

In addition to meeting weekly, the students have planned a variety of activities, from a scavenger hunt Oct. 17 and a fall party on Halloween, Oct. 31, to a variety of events for the upcoming holiday season.

“It has definitely been a blessing,” said Paul Pifer, who was eager to be part of the program, and in fact, was one of the initiators.

“I feel like it has been a good thing, not just for (the adults), but it has helped grow our character, too,” said fellow participant Army Eckles, who noted he has really enjoyed “being able to interact with them and find out who I can relate with, and have the opportunity to be really casual with them.”

Army also said the program has been out of his comfort zone.

“I don’t usually go and serve, but this has been a great opportunity,” he said. “I didn’t know if I would like it, but to be able to be friends with (the adults) has been pretty cool.”

“When I first heard about it, I was excited,” said Hyme Benson, who added he had worked in the past with Helping Hands through the National Honor Society and as a fourth-grader.