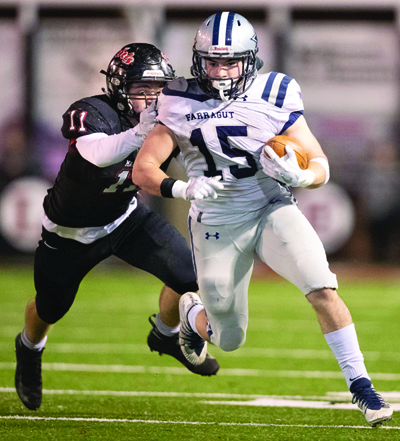 Kyle Carter (15), FHS senior running back, tries to break a Red Rebels tackle attempt.
MARYVILLE — Farragut was 50 yards from a tie game late in the first half against the championship machine known as the Maryville Red Rebels.

The Ads not only failed to get a first down, however, but MHS went 70 yards in the final minute of the first half ending with a 40-yard field goal and a 13-3 lead.

It set the stage for Red Rebels third quarter dominance that salted away yet another Maryville trip to the Class 6A state semifinals, winning 26-10 at MHS in the quarterfinals Friday night, Nov. 17.

The mighty defending state champs (12-1) have won five of the last nine 6A state crowns while appearing in three other title games in that nine-year span.

The Ads (11-2) got a 29-yard field goal from sophomore Daniel Bethel in the second quarter and a 1-yard TD run from senior quarterback Jake Evans in the game’s final minute, which followed a 35-yard pass from Evans to senior Tanner Corum to the MHS 1.

As Region 1-6A champs, “We got better every week,” FHS head coach Eddie Courtney said. “… The guys showed a lot of character this year. They played hard and they got together and bonded.”

But against the Red Rebels, “at times we just didn’t make things happen when we needed to, to stay in this game,” he added. “We tackled well, we got off blocks. We just couldn’t make enough big plays.”

“We’ve all been taught the best the past four years by coach Courtney,” he added. “He’s always taught us the best values in life, what to do after football.

“I think he’s helped make us into fine young men.”

“This is obviously not what I wanted to have happen, but it was a good year,” junior quarterback Gavin Wilkinson said. “Hats off to the seniors, they had a great season. I love them.”

“Everybody got better throughout the year, and I don’t think we could have done it without everybody,” he added.

“We stayed healthy pretty much through the entire year.”

About his senior teammates, “We do have a huge class, a lot of talent, a lot of (college) commits in our grade,” Kuhn said. “Before the season we were able to come together and agree to work hard toward our common goal.”

Once the season started, “We met once a week as a senior class at one of the senior’s houses and we’d eat dinner and just hang out together,” he added. “We have a real sense of community. … We’re a tight-knit group for sure, a lot of love between us.”