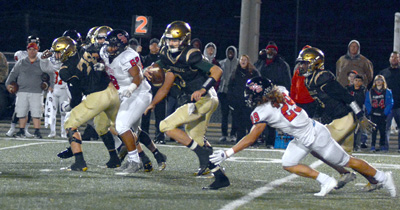 The Irish — who trailed in all of their Class 5A playoff games in 2018 only to come back and post victories over West, Fulton and Oak Ridge — saw their hopes of repeating as state champions dashed in a 24-19 loss to Knoxville Central in the state semifinals Friday night, Nov. 23, in KCHS’s Blaine Stadium.

The Bobcats took the opening kickoff and marched 80 yards on just two plays. Junior Jason Merritts capped off the short drive with a 41-yard scoring scamper.

The touchdown was set up by a long run by Daunte Holliday, which would set the tone for the Bobcats (12-2) in their quest to avenge last year’s state semifinal loss to Catholic in Fountain City. The Irish, who close the 2018 campaign with a 9-4 record, knocked off Central 42-7 last year en route to winning the 5A state title.

Catholic did have an answer for Central’s first TD, pulling even on a 1-yard scoring reception by Xavier Story, who would recover a Central fumble while the Irish were in the midst of a frenetic fourth-quarter comeback try.

But the Irish had turnovers on their next two possessions, as they fumbled and Jancek was picked off. The Bobcats turned one into their second touchdown when Dakota Fawver threw a 24-yard scoring strike to Demetrien Johnson to make it 14-7 late in the first stanza.

Two more Irish turnovers stifled drives, and Swislosky added a 26-yard field goal on the final play before halftime to make it 17-7.

“When you commit four turnovers in the first half and you’re only down 17-7, you’re really lucky,” Irish head coach Steve Matthews said. “We were lucky that it was that close. It just wasn’t our night.

“But you have to credit Central for that. They did a great job, and hopefully they’ll represent East Tennessee well at state.”

Central took a 24-7 lead early in the third quarter before Catholic’s comeback attempt.

Stiles Moore and Taylor Shannon each caught fourth-quarter touchdown passes from Jancek, who finished 15-for-21 for 146 yards and three touchdowns. He also had 17 carries for 64 yards.

“It was a great season but we just came up short,” said KCHS freshman running back Keondre’ Jarmon, who emerged as one of the area’s top running backs this season.

“We worked hard enough but we just didn’t play well and tonight, that showed on the field.”