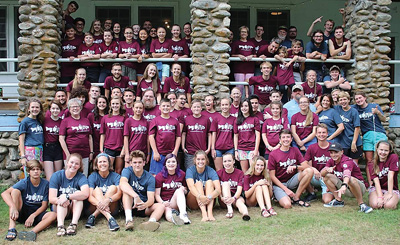 Andy Pifer’s Christian mission campers and staff in Haywood County, North Carolina.
Having experienced “a very strange encounter with the Lord” that led him from rebellion to Christian ministry at age 23, Andy Pifer now faces another Christian transition 30 years later.

Until last May, Pifer, 53, served 15 years as director of Student Ministry and Mercy Ministry at Christ Covenant Presbyterian Church in Farragut.

“I thought, ‘maybe I should try a different career where I could still serve the community,’” added Pifer, who now is a licensed real estate agent with Honors Real Estate Services and “my friend” Glen Glafenhein, principal broker/owner/founder.

With Pifer having owned “three different contracting businesses … I brought that to the ministry … I did over 50 Mercy Mission trips at Christ Covenant,” he said about a worldwide scope that featured “five different continents.”

He remains executive director of Thumbprint Ministries, “a non-profit I started in 2013 that focuses on widows, the homeless, those without a father and those in need,” Pifer said.

In a related ministry each July, “I run a mission camp in Haywood County, North Carolina, for youth groups and for adults to come alike,” he said.

Under the direction of his immediate family, a few trained volunteers and about six part-time hired hands, “about 300 come every summer,” Pifer said.

“We go out each day into the community to serve,” he added.

Previous to Thumbprint and Haywood County, Pifer did similar mission work “for 10 years in Harlan County, Kentucky,” he said. “… I had been praying and fasting for six weeks that God would give us a new place.”

“He has touched a lot of lives,” Glafenhein said about Pifer.

From rebellion to deathbed

Pifer’s “transition into the ministry,” however, was motivated by God’s healing power after he almost died at age 23.

“I knew He had called me when I was a teenager to be a full-time minister — but I didn’t want to be,” he said. “I kind of rebelled against that.”

A high school soccer star in Columbia, South Carolina, Pifer was the model of health as he played NCAA Division I college soccer.

However, “When I was 23 I ended up in the hospital with this weird virus — nobody knew what it was,” Pifer said.

“I was in there like six or seven days. They called the pastors in and everything. They thought I was going to die; in fact, the doctor told my mother I was going to die,” he added. “They didn’t know how to stop this viral infection that was headed to my brain.

“I remember the doctor coming in, and I was coming in and out of being comatose because they had me so heavily drugged up from the pain, and he said I was going to die. I was on this drug that makes you dream a lot.”

In the hospital about a week, suddenly “everything just went black and still,” said Pifer, who became an ordained minister in 2004. “I thought, ‘maybe that doctor’s right, maybe I died.’

“As you hear when you’re a little boy, you start getting out and looking for the light,” he added. “So that’s what I did in my dream, or vision or whatever it was. … I started running and I got really frightened.

“I stopped, and I remember crying about it in my vision.”

The voice Pifer said was the Lord’s responded, “’Then feed my sheep as I’ve called you to do.’”

Pifer said he answered the Lord, “’I’m going to do it.’ … He had called me to full-time ministry.

“I immediately woke up and my mother was sitting beside me, and I started pulling my IV out. I felt like a million bucks,” he added. “… I said, ‘I’m leaving this hospital today. God has healed me.’

“… The doctor came in and he checks me all out, and he said, ‘you’ve been healed, that’s all I can say,’” Pifer said. “They ran a bunch of test that day and let me go later that day.”