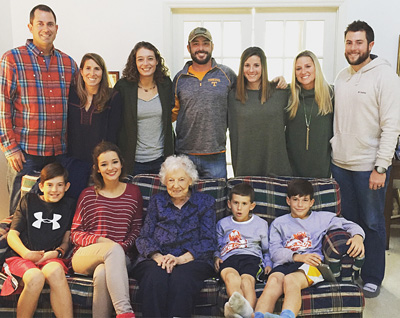 Her work ethic and faith are the source of her long life, as she prepares to celebrate her 100th birthday Sunday, Dec. 9, with family, friends and fellow church members at Faith Fellowship Church in Dixie Lee Junction.

“I’m surprised,” Wanda said about her upcoming birthday. “I had (three) brothers and (four) sisters, and they’re all gone but me.”

While Wanda credited farm food as her reason for a long life, her daughters, Charlene Troutt and Rosemary Rutherford, both Farragut residents as well, credited her work ethic, strong Christian beliefs and genes.

“She’s probably the hardest working person I’ve ever met and will ever meet,” Troutt said of her mother. “She’s worked all of her life, and she’s very independent, and that’s what I credit for her still being here.

“And, she’s a strong Christian lady,” she said of her mother. “If you every need somebody to pray for you, that’s who you’d want to call.

“I would also say she was a very sacrificial-type lady,” Rutherford added. “She thought of her family first. She would sacrifice herself to make sure we had things we needed or wanted.””

Wanda was born in 1918, the year World War I ended, to Charter Emsley Pratt and Adelia Luttrell Pratt on a farm off Strawberry Plains Pike. She was the second youngest of eight Pratt children.

She remembered her family’s first telephone, which came with a party line, and car, a Model T.

Then her father bought a Dodge. “He had milk route,” Wanda said. “He had customers in Knoxville. Twice a week, he’d drive there and they’d buy milk from him.”

The Great Depression also left a lasting impression. “You had to be real careful on what you bought and used,” Wanda said.

“My first job was at Wholesale Grocery, in the office,” Wanda recalled. She had worked there for five years, then went to work for J.E. Lutz Insurance for another five years before she married Charles Weigel Dec. 9, 1949, when she was 31. They had the two daughters.

She had met Charles, now deceased, at church. He grew up in the small community of Asbury, which was near her childhood home. “It seemed like I had always known him,” she said. “He came to my church.”

“Rosemary was in the second grade when I worked at Sunnyview Elementary School, in the office, until I retired,” Wanda added.

However, that was not her only occupation. Charles had bought a farm on what is now Saddle Ridge subdivision, off Union Road in Farragut, in 1948, the year before the couple married.

“Most of the Weigels had farms back then,” Wanda said. “I loved it. I still love the farm (life). I love the country. I could pick blackberries and do anything.