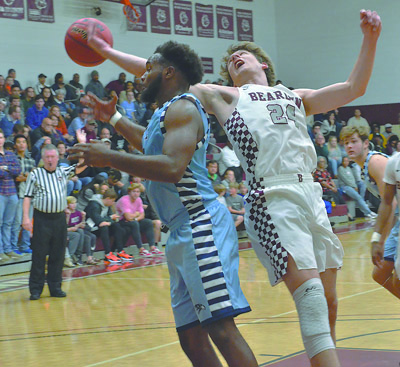 But eventually the Bulldogs would pull away and capture a 73-50 victory over the Hawks Friday night, Nov. 30, before a packed and boisterous house at BHS.

“We came out in first quarter and we played the way we were capable of playing,” said Shane Chambers, HVA head coach. “But then Ques Glover got hot in the second quarter and he finished (the game) with 25 points.”

“It’s great to have Roman (Robinson) back (from injury) and we were able to go out and get another win without Drew (Pember, 6-foot-10 senior wing) and Shaq (Brown, 6-foot-5 senior post),” both out with injuries, Glover said.

He also ran Bearden’s offense and provided a huge lift as the Bulldogs’ full-court press rattled and all but stifled the Hawks (3-4, 0-3) after halftime.

“But Roman was in his second game (back) and he’s always been a ‘Steady Eddie,’ and he did a good job for us tonight,” he added.