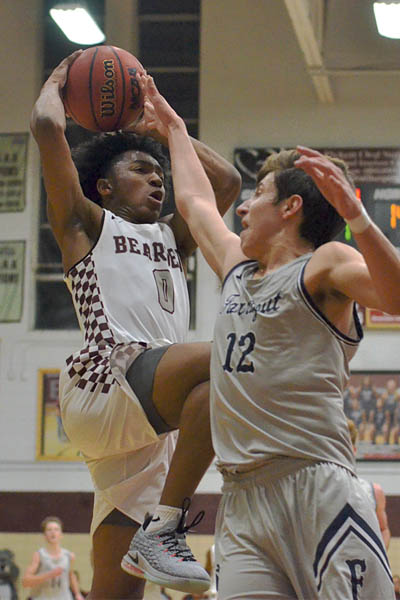 Every time he touched the ball, Bulldogs fans went into a frenzy. He responded by scoring nine points, rebounding and making several defensive plays to help Bearden cruise to a 77-21 District 4-AAA victory versus rival Farragut before a packed and boisterous house at BHS.

“It was great to have him back,” BHS head coach Jeremy Parrott said. “He practiced a little bit this week and when he came into the game, he gave us a big lift. He came in and he did Shaq things.”

Brown, who missed Bearden’s first eight games recovering from a football injury, said he was happy to be back on the court for the Bulldogs (7-2 overall, 4-0 in the district).

“It had been a long time since I played (basketball) and it just feels great to be back,” Brown said. “It’s been a while, and it was great to get a win against Farragut. But coach did a good job getting us ready for this game.”

Senior Roman Robinson was one of three Bulldogs to post double figures in scoring (11 points). Ques Glover had a game-high 22 points and Trent Stephney added 11. Tyler Nordin and Kordell Kah each scored eight.

“They started the game with a big run and we let that get into our heads,” Atwell, a freshman guard, said. “We didn’t play well, but we can’t let ourselves be defined by this. We have to bounce back and we have to get better.”