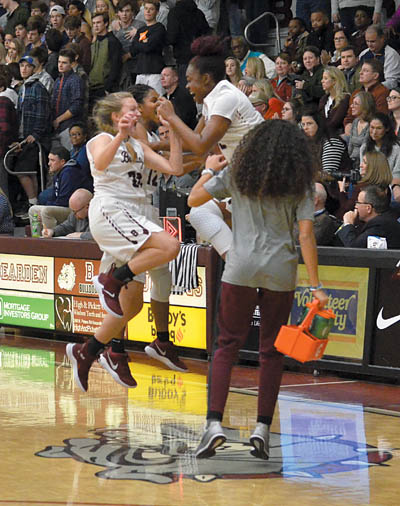 She said she had to battle a few nerves as rival Farragut visited BHS.

“I was really nervous at first, but the energy from the team and the crowd really helped,” said McLaughlin, who scored 16 points and grabbed nine rebounds to lead the Lady Bulldogs to a lopsided 72-36 District 4-AAA victory over the Lady Admirals. “We were so excited. ... It’s a rivalry and we wanted to come to play.

“This was the most complete game that we’ve played this season,” BHS head coach Justin Underwood said. “We talked about the fact that we needed to be the aggressor.”

Bearden (8-1 overall, 3-1 in the District) indeed was the aggressor on this night. Four players posted double figures in the scoring column, as the Lady Bulldogs seized control of this contest early.

“Tonight we showed what we can do when we play 32 minutes of basketball,” Underwood said. “In this district, you can’t afford to take a night off. You have a ton of good teams in this league.”

For the Lady Admirals (8-2, 2-2) it was a second consecutive district loss after being edged at Maryville Tuesday, Dec. 4. “Pretty much from the outset we allowed them do whatever they wanted,” FHS head coach Jason Mayfield said. “They made plays and they won the tough battles.

“... We knew what they were going to do and they did it,” he added. “We just have to be better as coaches in our preparation, and we have to learn what it takes to win these kinds of games.”

“Tonight, they made our weaknesses their strengths,” Christian said. “We just have to practice and get better. We still have a lot of basketball left to play.”