Service in 3 wars for Sizemore 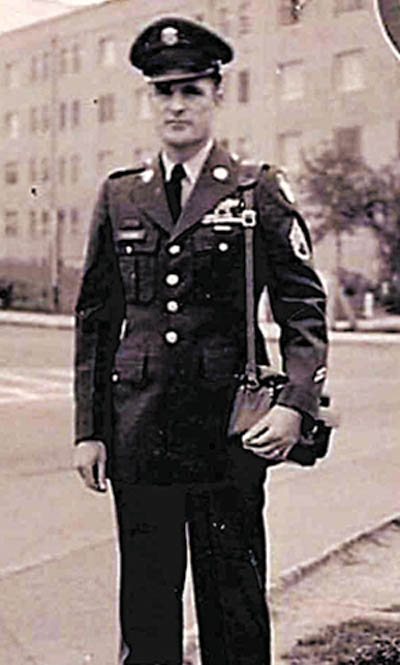 Allen Sizemore serving in Berlin during the early 1960s.
For the first time in three years, a World War II veteran was in the audience for Frank Galbraith’s annual “Day of Infamy” presentation at Farragut Town Hall.

Allen Sizemore, 89, of Farragut was a veteran not only of that great war but also combat battles in Korea and service in Vietnam during his 31 years in the U.S. Army.

The Sevier County native was only 17 when he enlisted. He needed permission from his father, who was reticent because Sizemore’s brother, Charles, already was fighting overseas.

“He didn’t want another son in the war, but I wore him down,” Sizemore said.

“I thought I might be able to be with my brother.”

Tragically, Charles was killed at the Battle of the Bulge just days away from the end of the War in Europe.

Sizemore, as a member of the 101st Airborne division, said he was called into service in Japan and helped set up a hospital after the atomic bombs dropped in Hiroshima and Nagasaki.

He said the military was “bringing troops home, but they were also sending troops over.

“The war was still going on,” he added. “You don’t just flip a switch and everyone stops fighting.”

Sizemore spent two years in Japan, and described a people struggling through numerous shortages that propelled them into desperation.

“People were killing each other for food and money,” he said, noting some parts of his job included fishing bodies from canals — then adding softly, “that bothered me quite a bit.”

He encountered the rough realities of war again in 1951 in Korea, as part of the 187th Airborne. Some soldiers were guarding prisoners while others were replacements for artillery units. “There were dead bodies everywhere,” he said. “When you are in combat you can’t take care of the dead or anything, you are just fighting.”

He said a fine dust settled everywhere, even on the soldiers.

“That dust and blood would get on you, and sometimes would be an inch thick,” Sizemore explained. He blamed that experience for the physical disabilities he has experienced since, requiring surgeries on both hands, his feet and his back — and it has required him to be on oxygen almost constantly.

Sizemore’s service in Vietnam was less harrowing, as his duty was providing subsistence for thousands of soldiers in Saigon, ensuring they had enough food.

He said the scariest experience he faced in Vietnam “was getting out” to end his service there, recalling the air strip where he was to take off was mortared the day before.

“No one was killed, but the previous bus didn’t make it. I made it, and I didn’t care where it was going. I just wanted to get out.”

As for memories, “There are a lot of things that stay with you — not good, some of them,” he said.

Sizemore also was called to duty in Berlin in the early 1960s during the Cold War. There, he inspected stored weapons that were not in use. He also worked several jobs state-side during his service.

“I never had a job where I didn’t get a letter of commendation,” he said.

The veteran and his wife, Dorothy, married in 1952 and had four children. They were together until Dorothy’s death in 2009. He also has seven grandchildren and numerous great-grandchildren.

Sizemore credits God with guiding his path. “I was born dead,” he said. “My father stayed on his knees by the bed I was in, all night. I wasn’t aware, but I am here.

“And when I was 11 years old, my father blessed me, and from that day forward the Man above has been my guide,” he added.

“Some people don’t believe that, but when it happens, you know it.”