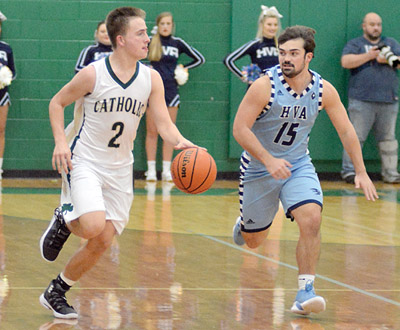 “We’re a different team than we were the first week of the season,” said Hutchens, head coach of an Irish team improving to 5-1 in District 4-AAA, 9-1 overall. That first week featured the only KCHS loss, which came at home versus district power Maryville.

“A lot of freshmen are starting to learn what’s going on now,” he added. “We’re not where we need to be yet, but by the end of the year we will be a handful.”

Brian Edwards, Irish freshman point guard, led all scorers with 16 points despite “sitting out the whole second quarter in foul trouble,” Hutchens said. “Since the Maryville game, where he had nine points, I think he’s averaged right at 21. He’s really coming on for us.”

Hardin Valley dropped to 5-6 overall, with two of those wins in 4-AAA games.

“We didn’t execute as well as we would like, even though the effort was there,” he added. “And this being our third game of the week, I felt like we started to show being a little tired.”

Cartez Campbell, senior guard, was the only Hawk in double figures offensively, scoring 10.

“Cartez Campbell and Bryce Jenkins are seniors who were in there fighting,” Chambers said.