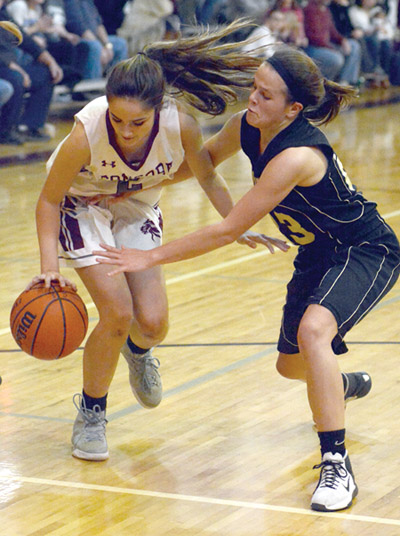 Sydney Petersen, Concord Christian School freshman guard, left, tries to gain control of the ball despite tight pressure from a KACHEA defender. The Lady Lions look to improve on a 2-7 start to the 2018-19 regular season.
Oh so close to victory last Saturday afternoon at home, the Concord Christian School Lady Lions are “learning how to trust each other. We haven’t played together that much.”

Despite a loss at J. Frank White Academy in Harrogate Friday, Dec. 14, “Ashley ended up with about 25 points,” Mynatt said about the junior. “We’ve got three ladies, as far as scoring is concerned, who have been really consistent for us. Maddie Mee, she gives us about a dozen (point per game).”

While losing a one-sided affair versus Division II-A state powerhouse Webb School of Knoxville, “the other six losses we’ve had are games we’ve been (competitive) in, and we should have just pulled those games out,” he added. “It’s just been a matter of trying to put together two halves. And we haven’t done it yet.”