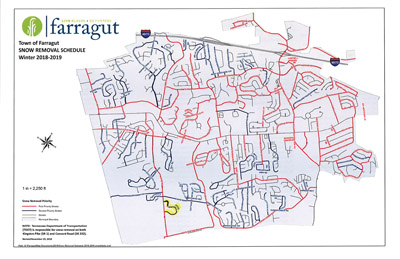 With winter at the doorstep, Town of Farragut’s Public Works Department is getting ready its plow, trucks and snow schedule.

Farragut Board of Mayor and Aldermen approved the proposed 2018-2019 snow removal schedule during its meeting Thursday, Dec. 13, with two changes.

At Vice Mayor Louise Povlin’s recommendation, the Board changed the schedule’s verbiage to replace first and secondary “priority” roads to read “stage” roads.

“That’s a sticky word for some of the people in the North Ward,” referring to the word “priority.”

“I would love it if we called this a snow removal efficiency schedule because that’s what it is,” Povlin added. “We try to do it in the most efficient manner so that everything can get done in the quickest amount of time.

“So we have first-stage roads, and we have second-stage roads,” she added. “I think that goes a long way to explaining what is really happening.”

Another change was to add at least one park to the schedule.

However, Bud McKelvey, Public Works Department director, said his crew could do only the roads in and out of the parks.

“I think Bud’s been at this a while and, regardless of what you call it — while it does sound more pleasing to the ear — it’s very efficient,” Mayor Ron Williams said noting he has watched how the snow removal was done.

Alderman Drew Burnette asked about how the parks, ”where a lot of families head toward as soon as there is snow,” are handled.

“You’re the first person who’s asked me that question,” McKelvey noted. “We do not have the parks on the list. Our main priority is the streets.

“We could go to the parks when we are done,” he suggested. He noted, however, the crew has to be mindful of speed bumps and the pavers in parking lots.

“You get into a park, and what you end up with is the parking lots are miserable because they are so big, and there’s nowhere to get rid of the snow.”

This year, while most is the same as last year, he is adding Pryse Farm Boulevard to its secondary roads listing.

“Many factors are taken into consideration during road evaluations, such as elevation, number of houses, north-facing slopes, the amount of shade and trouble areas reported by our citizens,” he said.

As soon as the roads on the first priority are plowed and snow has stopped coming down, McKelvey said then his crew goes to the secondary roads and to slush, easy road list.

“If we have all five going, we can run a little ahead of the schedule,” he said.