Family 'lights' up with Christmas tradition 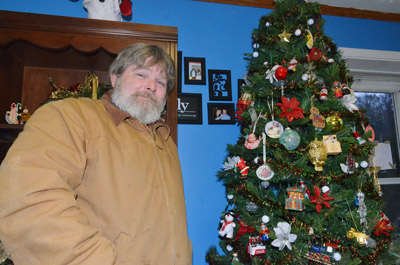 Mark Musillami has been decorating his Hardin Valley home for over a decade, and his displays have earned him the nickname “Clark Griswold” from the classic “Christmas Vacation” movie.
Mark Musillami really set the bar high for himself when he spent one of his first Christmases with his now wife Connie and her children.

“That first year, we were putting up Christmas lights, and Connie’s [then 11-year-old] daughter ‘wanted the whole house’ in lights,” said Musillami, who did his best to oblige — and then some.

“That first year I overdid it,” he recalled. “You could have seen [the house] from space.”

That was nearly 20 years ago, and even though injuries have limited his movement, Musillami has done his best to keep the tradition alive at their Hardin Valley home, even earning the nickname “Clark Griswold” from the classic Christmas Vacation movie along the way.

This year, he relied on help from his children Brittaney, Kristina and Kristina’s boyfriend, Connor Blackburn.

He has quite the collection, with more than two dozen tubs, boxes and free-standing decorations stockpiled in the top of his family’s two-story barn-shaped storage unit, containing candy canes, Santa Clauses, Frosty the Snowman, stars, strings of lights and an oversized Nativity.

Musillami said he typically has the lights ready to go just after Thanksgiving, but he has been crippled down through the years by breaking his back four different times, and wasn’t sure if he would put up anything much this year.

“I never missed a year, until three years ago,” he said.

However, his children prevailed.

“They kept hounding me about it, and I told them they would have to do it for me, but I would tell them where [everything] goes,” Musillami said.

He has a method, with snowmen and candy canes lining the driveway and sidewalk. The Nativity is nestled between the walkway and the house, and a Christmas tree made entirely of strings of lights criss-cross between two sides of the front porch. Musillami estimates several thousand lights are strung on and around the house, and in more recent years, kaleidoscope projector lights have added to the display.

While he and his wife have collected many holiday decorations themselves, Musillami said a lot of the ornaments and light displays first belonged to his mother and grandmother.

“My grandmother collected ornaments from the 1920s until she died in 1982,” he said, and noted his mother was just as dedicated to the holiday until her death in 1997.

“I used to do Christmas up real big with my mom when I was growing up — from the time I was young,” Musillami said.

His wife said Christmas is her favorite holiday too, and pointed out many sentimental ornaments on the family’s indoor tree.

“You might [find a way] to replace the items, but you can’t replace them or their memory,” she said.

Keeping them alive through the lighting displays keeps their loved ones close, too. Neighbors enjoy the lights, as well, and apparently contacted local TV stations this year, who interviewed the family and filmed the display.

Connie’s daughter, Lisa, said she does enjoy seeing kids’ faces when they look at the lights, and, although she wasn’t able to help this year, said the hard work that goes into the display, “is worth, it if it makes someone happy.”