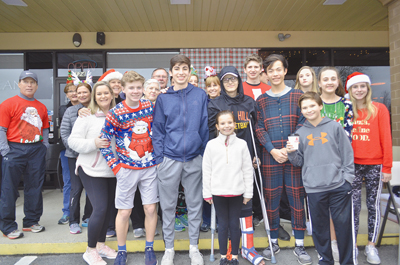 Runners turned out for Orange Theory Fitness of Bearden’s second annual Ugly Sweater 5k Sunday, Dec. 16, to support Farragut High School student Mason Motley, who has been battling a rare form of cancer since May. Funds were raised for Motley and his family, and for East Tennessee Children’s Hospital. With friends and family members pictured alongside, Motley (in ball cap and hood); is joined by his brother, Carson Motley (front right); sister, Cali Motley (center front); and mother, Kristin Motley (in cream sweater center, left). Friends on hand included, in no particular order, Brandon Cuevas, Carter Mayfield, Jake Bishop, Pierce Vaught, Brooke Vaught and Tessa Scherer.
As Farragut High School sophomore and basketball player Mason Motley continues to battle a rare form of cancer, the community is battling right along with him.

Not only did students, teachers and families show their support Friday, Dec. 21, by wearing Farragut Admirals Navy blue colors to the varsity basketball games, but earlier in the week (Sunday, Dec. 16) a 5k run and fun walk fundraiser was held in his honor at Orange Theory Fitness in Bearden.

The event actually was the facility’s Second Annual Ugly Sweater Run, but this one was dedicated to Motley and his family. An estimated $2,800 was raised in donations to the GoFundMe page set up for them.

Any money not used for medical expenses will go to East Tennessee Children’s Hospital, where Motley is undergoing chemotherapy treatments, and to ETCH Hematology/Oncology Patients and Parents program.

“I can’t begin to say how grateful we are for the love and support that we have received,” said his mother, Kristin Motley.

Farragut resident Leah Braden, who owns Orange Theory, organized the event after learning about Mason’s situation from one of her Orange Theory clients who works with Mason’s parents (father is Tim Motley) at Discovery.

Braden noted “more than 50 percent” of the more than 70 who turned out for the run did not even know Mason or his family.

“We had the Bearden dance team here, who were helping with the Kid’s fun run” among the many volunteers, she said. “We hold a lot of community events, and it proves time and time again how supportive we are of each other, no matter who it is or where they live.

“I know in these situations that families can really feel helpless, but we are here saying ‘we’ve got your back,’” she added.

Mason and his parents were joined at the event by his brother, Carson, and sister, Cali, along with Mason’s grandparents and many friends.

“A lot of kids from Bearden Mason does know because they played AAU basketball together,” his mother said. “But it is amazing, the support we have received from pretty much everywhere.

“This is just a huge testament to Farragut and the community and how supportive they have been, and continue to be.”

Mason was diagnosed with osteosarcoma in his lower leg in May, requiring chemotherapy and surgery. The family went to Dana Farber Institute in Boston — a leading cancer treatment center — to begin treatment before his surgery at Boston Children’s Hosptial.

Kristin established a Caring Bridge page to update Mason’s progress, and in a recent entry dated Dec. 13, she shared that a recent surgery showed cancer cells within the removed tumor “appear to be dead.

“That was a huge victory and a true blessing,” she added.

Mason will continue his chemo at ETCC for about another month, and remain on crutches for up to nine months while his leg continues to heal, Kristin said.

“But it certainly hasn’t stopped him from getting out and being with his friends,” his mother wrote. “I think what has kept him going is being able to spend time with his friends.

“It is basketball season now so whenever he’s not in the hospital, he is trying his best to get to his high school basketball games. His teammates and friends mean everything to him.

“I want to let you all know how grateful I am for all of you that have reached out with your encouraging words, prayers and positive thoughts,” she continued. “It has been so touching to see so many people rallying around Mason to give him support throughout his treatments.

“We are so extremely blessed to have so many wonderful people in our lives and I know that Mason will never forget what everyone has done for him.”