Circle of Excellence, to Fox, is Crye-Leike’s highest honor 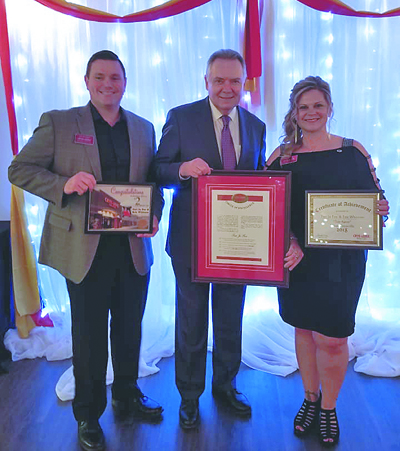 The long-time Realtor earned Crye-Leike Realtors’ highest honor, its Circle of Excellence Award for 2018, along with an accompanying diamond-encrusted pin, which were presented last month by company owner Harold Crye.

The award was the culmination of five years of hard work by Fox, who has been with Crye-Leike Realtor’s West Knoxville office for almost six years.

She is only the second Knox County recipient of the award: the first was Diana Traylor, who now works in Fox’s office as its broker.

Fox said she quickly set her sights on earning the prestigious award after coming on board with the company, even though it would require a long-term commitment, as award criteria starts with being a continuous five-year multi-million dollar producer.

“Even if you made that four years in a row, then the next year didn’t meet the goal, you would have to start over,” she said.

Meeting the first goal was an easy one for Fox, who has built a solid reputation in the field since receiving her real estate license in 2007 and currently is Knoxville’s No. 1 Crye-Leike agent in sales.

As far as industry and community service projects, Fox has served in many roles with the Knoxville Area Association of Realtors, including graduating from the first KAAR Leadership Class, and currently is serving as chairman of the KAAR’s Grievance Committee.

“It is ethical behavior throughout the community,” she said. “And that is of utmost importance to me. I don’t care if I lose a sale, as long as I can look at myself in the mirror.”

She said it also is about “showing value to others. I never treat anyone as just a paycheck or a transaction.”

One of her biggest cheerleaders has been her husband of five years, Eric Whitener, who is part of The Knox Fox Team at Crye-Leike.

“He’s my favorite person,” she said — and the feeling must be mutual, as the two spend almost 100 percent of their time together between work and home.

“We work a lot, but we work hard,” Fox said. “I think we are the hardest working Realtors you will find anywhere, and we take great pride in our work.”