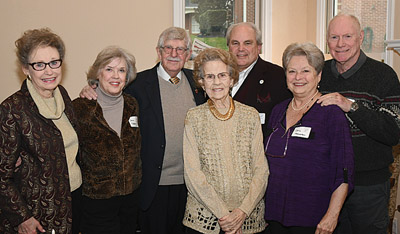 To honor famed East Tennessee political cartoonist Charlie Daniel, third from left, after 61 years of applying his craft to rave reviews before recently retiring, a reception was held in his honor at the home of Steven and Lin Oglesby in Waverly Court, Farragut, Sunday afternoon, Feb. 17. Among those on hand to honor Daniel was U.S. Rep. Tim Burchett (R-2nd District — not pictured), who also honored Daniel with a speech before Congress. Alongside Daniel, from left, are Lin Oglesby, Ann Klebenow; Patsy Daniel, Charlie’s wife; Oak Ridge Mayor Warren Gooch; and Leslie and Barry Henderson. State Sen. Becky Massey (R-District 6) also was among the list of dignitaries on hand.
Distinguished friends and former colleagues joined family members to honor political cartoonist Charlie Daniel, which recognized his 61 years of popular and award-winning contributions to East Tennessee.

A reception was held for the retiring Tennessee Journalism Hall of Fame inductee at the home of Steven and Lin Oglesby in Waverly Court, Farragut, Sunday afternoon, Feb. 17.

U.S. Rep. Tim Burchett (R-2nd District), who first recognized Daniel’s accomplishments with a speech before Congress, also was on hand to honor Daniel with a framed copy of that Congressional speech.

“I rise today to recognize the career of one my district’s most notable journalistic figures,” Burchett’s Congressional speech began about Daniel. “… He is a Marine who served his country admirably, and his retirement is a loss to our community. … I’ve been made fun of by people all over the world, but Charlie Daniel is my favorite.

“His cartoons were razor sharp, while still being respectful,” Burchett added. “ … He is a Tennessee Journalism Hall of Fame inductee and has been recognized by the National Cartoonist Society. I am honored to call him my friend, and I know I speak for many in East Tennessee when I say the morning paper isn’t the same without him.”

A former colleague of Daniel’s at The Knoxville Journal, Lin Oglesby said, “I’ve known Charlie since the early to mid-’70s, and there’s no greater person or greater Christian who is so involved with the community and cares about this community. His cartoons have been great, and then he brought ‘Rosie’ (his popular character) on and it just kind of completed him.”