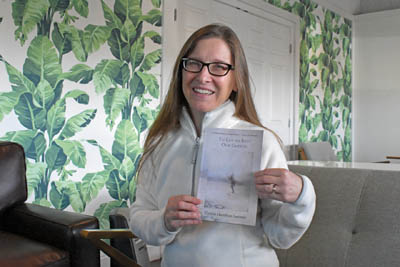 Not only was she able to share the book’s completion with her family, but also awards and honors keep rolling in more than a year after “To Lay to Rest Our Ghosts” was published.

Summie’s book won silver in the Foreward INDIES Book of the Year Award for Short Stories, was selected for “35 over 35’s” annual 2017 list and was named a Pulpwood Queen Book Club Bonus Book.

Summie, who also taught a class and performed a reading as part of the Festival, received the award Tuesday, Feb. 26.

The award itself was founded in 2016 to promote recently published books and honor central Arkansas author and literary advocate Phillip H. McMath, who himself selects overall winners from finalists chosen by Arkansas Writers MFA Workshop students, according to a press release.

Summie believes her book has resonated with readers and critics alike for its focus on universal themes such as family, loss, conflict and reconciliation.

“I write about real-life things and subjects … they are about what connects us,” she said. “Ultimately, I think all of my stories are really about hope.”

A life-long writer who grew up in Massachusetts and Minnesota, Summie recalled her mother’s description of an early eagerness used to put words to paper.

“Before I knew my alphabet, my mother said I would bring in ‘my stories’ to her to read, and she had a unique reaction that I am not sure I would have had,” Summie said. “Instead of trying to make it out, she would ask me to read them to her.”

That early encouragement led Summie to complete her first novella by age 13 and two short novels by 18.

She majored in Middle Eastern history as an undergraduate, and received an MFA with distinction from Colorado State University.

Summie’s love of the written word also was a factor in launching her own book marketing firm, Caitlin Hamilton Marketing & Publicity, which she co-owns with her husband, Rick.

While “To Lay to Rest Our Ghosts” is her first book, she also had work published in Beloit Fiction Journal, Wisconsin Review, Puerto del Sol, Mud Season Review and Hypertext Magazine among others.

Summie, her husband and their children, Colin and Alexandra, moved to Knox County nine years ago from Denver, Colorado, to be closer to family.

Still, she never gave up on her collection.

“I kept going and kept trying until I finished,” she said.

It was published by Fomite Press in August 2017, and was officially launched at Honeybee Coffee just outside of Farragut.

“It was worth waiting 25 years, if I got to celebrate with my kids and my mom and dad,” she said.

“Some things take time, and it is almost a greater gift for me to have published it now.”

Summie currently is working on a novel that will carry on the stories of three sisters from the short story compilation.

“I had a lot of people ask me what happened to the sisters? Do they make it?” she said, adding the interest in her subjects echos her own.

“When people like my characters, I feel an immense sense of gratification because they are as concerned with them, and what happens to them, as I am.”