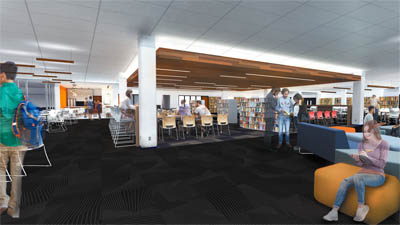 Rendering of completed three phases of renovated Farragut High School library, which is planned to include a café to be operated by FHS student classes, according to principal Ryan Siebe.
Though Farragut High School’s No. 1 academic status among Knox County’s traditional public high schools has been the norm in the 21st century, the school’s outdated library makes the learning process more difficult.

A vital hub for students on three fronts in addition to books and reference material — technology access, classrooms and a study hall — the library has not seen significant physical changes since the “new” high school was opened to begin the 1976-77 school year, FHS principal Ryan Siebe said.

“Here we are, one of the best schools in the state, and yet we don’t have a temporary study area,” he added.

Known formerly as The Technology Gala, this spring’s newly revived gala is all about raising thousands of dollars to overhaul those physical issues.

Featuring the band “Whiskey Compass,” a silent auction and dinner by Seasons Innovative Bar & Grille according to Mary Nussbaum, PTSO president and event chair, “The Admiral’s Gala, An Evening Under the Stars,” begins at 6 p.m., Thursday, April 4, at Riverview Family Farm.

With the library at its peak capacity in the morning, “You’ve got 200, 300 kids in there. They love the library. And yet it essentially hasn’t changed since the school was built,” Siebe said.

With four classes taking place in the library at its peak, “there’s a lot of times the space isn’t really user friendly,” he added. “… The reality is, the furniture that they’re hanging out on and the spaces they have aren’t kid-friendly. They’re not pleasant.”

“Really, it’s one open, huge space,” Nussbaum said about the current library and the need for partitions.

“And the furniture is not mobile at all because it’s heavy,” said Jean Ogle, chair of the FHS Library Renovation Committee.

With an estimate between $300,000 and $400,000 needed to complete the library’s three phases of construction, “We’re assuming it’s a three-year plan,” Ogle said.

By August of 2019, “We’d like students to walk back in after the summer with a change,” Ogle said. “The first phase would be furniture, paint, carpet — the ascetics as you walk into the main part of the library.”

Ogle and Nussbaum detailed the other two phases.

“The second phase would be classrooms and some of the more expensive physical things that we can do,” she said.

For example, by installing portable partitions, “you can have different classrooms that can be opened up into one giant usage,” Ogle said.

“And then phase three would be a café to the area,” she added.

“It’s where students can come get something to drink or whatever before school, after school or during lunch,” Siebe said, adding student classes will operate the café. “The middle area will be defined as bar-type seating and a drop ceiling. The seating is bar height with taller chairs. … This will feel like a unique classroom.”

As for support, “Our goal is to get more parents involved,” Nussbaum said. “The Town of Farragut is really on board. We’ve gotten sponsorships from them.”

“At this point we almost have more Farragut community and businesses involved than we do parents,” she added. “… We really want more families to get involved with this, because it is really the future of their kids.”

As for other gala opportunities, “There are sponsorship levels available for table hosts and also sponsored tables,” Nussbaum said, adding that as of late February, “We’re up to 10 sponsored tables, which is 80 people.”