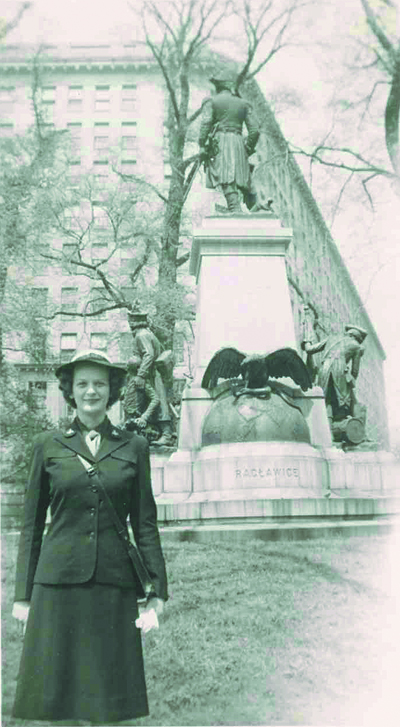 Olga Kapusta Kelso is pictured early in her Naval career in front of a statue of the Polish Gen. Kossimuski, located in Washington, D.C., where she had been assigned to work during WWII.
The next Honor Air trip from Knoxville to Washington, D.C., next Wednesday, April 10, will have a spry and engaging 97-year-old Farragut resident, and veteran, along for the ride.

Olga Kapusta Kelso, who lives at the Park Place retirement facility, will be one of 130 military veterans to take the one-day trip, which will be the 28th Honor Air excursion providing an experience of a lifetime for some, but a return to where Olga served for many years during her 20-year U.S. Navy career.

Olga said she might not have taken the trip, which is free of charge for the veterans, except she met two veterans at Walmart, who talked to her about the experience.

She also was encouraged to participate by veterans Jim and Diane O’Brien, who also live at Park Place.

“I was very pleased to be able to help her with this,” said Diane, who along with her husband is an enthusiastic supporter of the program.

Olga will be the only female among the 130 going on the April 10 excursion, which will take the veterans to monuments and other points of interest before returning late that evening.

She is eager to return to the nation’s capital.

“I’m looking forward to seeing the memorials, although I have seen most of them. I was most impressed with the Vietnam Memorial. I put my hand on it, and cried for all those boys who died.”

Born one of five children to Slovokia natives John and Anna Kapusta, Olga grew up in Northfield, Ohio. A rule-oriented, but kind and loving upbringing was her cornerstone in life.

“We had such good parents,” she said. “Our father was not a spanker. He would take us to the basement and give us a good long lecture, and tell us not to do it again. And we didn’t.”

Ogla’s military career path began after overhearing a soldier talk about the war. Then, just a few weeks later, she saw a newspaper account where the Navy had created the WAVES, and she was compelled to join.

“The same thing gripped me as had gripped the young men” who joined the cause, she said.

Olga said her father was against her joining, based on stories he “had heard at work.”

However, her mind was made up, and she enlisted in 1942 after turning 21. Olga actually was part of the U.S. Naval Reserves at that time, but was later allowed to enlist in the Navy itself as the rules changed in the late 1940s.

She was assigned to Washington, D.C., where she worked sorting and delivering mail. She may not have seen combat, but certainly experienced heartache when one of her brothers was killed fighting on Okinawa just two months before the war’s end.

Her own service continued, however. At one point, she was working in the office of the Undersecretary of the Navy as a stenographer.

It was a tough interview for that job, Olga said, recalling the officer in charge “used scare tactics to see if I could handle it.

“I told him I thought I could, and I did a good job. I never missed a note,” she added.

Olga requested a transfer to Cleveland, Ohio, to be near her parents, and she later spent two years in England, which coincided with the coordination of Queen Elizabeth II.

Her time in England was exciting, she said, as she was able to do a good deal of traveling.

Olga ended up remaining with the Navy until 1962. She met and married her husband, Jack Kelso who was also in the Navy, in 1955, and said he was only he second man she had ever dated.

“He was a good man,” she said. He became a gunsmith after his own Navy career wrapped up, and they eventually settled on 16 acres in Indiana, where they lived until he passed away following heart surgery in 1990.

She stayed on in their family home until about six years ago, when her sister, Elena “Elie” Martin, asked her to come to Farragut and live with her and husband, Jim.

Olga lived with her sister and brother-in-law, then she and Elie moved to Park Place a year ago, although Elie, ill with dementia, has since moved in with her daughter.

Olga is not lonely. She keeps active, taking advantage of exercise programs offered at Park Place. “If you sit too long, you forget how to walk,” she said.

She also has friends and looks forward to days when her niece brings Elie for visits.

Olga doesn’t seem to see herself as a trail blazer, just a patriot and someone who followed her heart into a career many women at that time didn’t pursue.

“I liked being in the Navy,” she said. “I worked for fine people, and I met fine people.