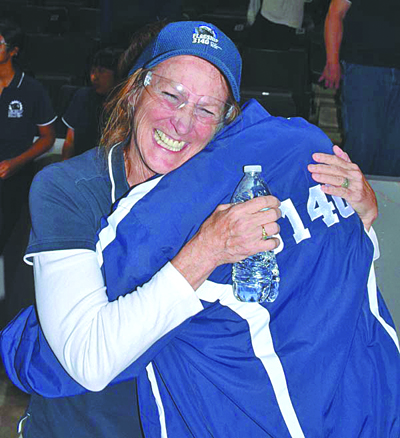 Jane Skinner, recently retired Farragut High School chemistry teacher following 26 ½ years of service, was one of FHS Flagship 3140 FIRST Robotics team founders back in 2009.
A major cog in launching Flagship 3140 FIRST Robotics Team at Farragut High School during the 2009-10 school year — and pouring her heart and soul into the program to the benefit of hundreds of students for almost 10 years — retired chemistry teacher Jane Skinner was hardly forgotten by this year’s team.

The “Skinnerbot” or “RoboJane” — or simply the “Jane Skinner 3140 Robot” — was the way the 2018-19 Flagship team honored one of the program’s pioneers and teacher of 26 1/2 years, who retired after fall semester in December.

“This team will always be in my heart.”

Though the team failed to qualify for the annual World Competition in Houston later this month, despite being part of a three-team alliance reaching the quarterfinals, Skinner’s presence was welcomed encouragement.

“She is honestly like the rock of this team,” said Flagship 3140 junior Evan Gitto, a team leader, partial mechanical lead and member of the pit crew. “She means so much to us.

“She’s so encouraging and she’s always there,” he added. “Without her I think it would be so much more gloomy, honestly. She just brightens up the team a lot.”

“As far as a teacher and a giver and a nurturer and just an overall role model for students, there is no one who compares to Ms. Skinner,” said Cook, whose older brother, Ryan Cook, was a member of the first two 3140 teams (Class of 2011). “With the time and dedication she has put into this program, to students all around — inside Farragut High School, outside Farragut High School — she’s a champion of the students.”

In Skinner’s final two complete school years with Flagship 3140, Farragut earned trips to the World competition after being part of Regional alliance champions in 2017 (Smoky Mountain) and 2018 (Palmetto Regional in South Carolina).

“Honestly, the most memorable and most joyful moment was winning the 2017 Smoky Mountain Regional in Knoxville,” she said. “I still tear up to this day when reflecting back to that competition and the moment we won. It took this team eight long years to win a championship, and it was well worth the journey.”

Recalling the team’s initial FIRST Robotics competition in 2010, “We traveled to the Atlanta, Georgia area, and we were a much smaller team — a really small team,” she said about a team, as best she remembered, having less than 10 members.

Skinner was quick to credit “Jill Hudson, part of the CTE program there, the engineering teacher — this team wouldn’t exist without her.

“She was there and she got it going,” Skinner added. “And I was just there to help out.”

Recalling the 3140 team preparing to compete “three or four years” into the program, “we had smoke coming up from our robot,” Skinner said. “But they were able to identify the part, borrow it from a neighboring team, and get it replaced before we put the (ro)bot onto the field to compete.

“They never panicked,” she added. “That’s what they do — they fix problems.

“It’s amazing what all this does for these students.”