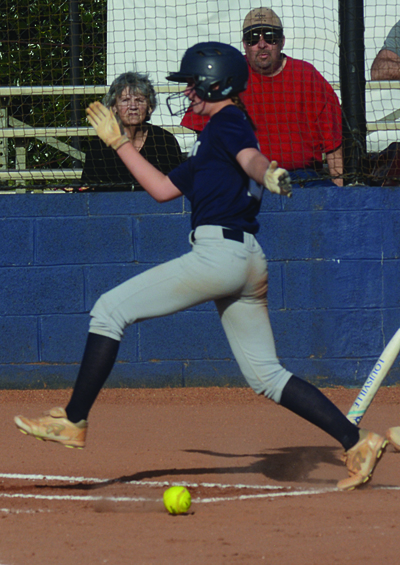 “It was like a low inside pitch, a fastball,” Caywood said about the pitch she crushed over the left field fence. Caywood also had an RBI single in a four-run Lady Ads bottom of the first.

Coach Nick Green’s Lady Admirals followed that up by going 4-1 during the Upper Cumberland Tournament in Cookeville last weekend, finishing third among a 15-team field.

Freshman Vivian Boles began a two-run third inning with a triple to right field. Sophomore Cameron Young then smacked an RBI double to deep left field, and later picked up an RBI after being hit-by-pitch.

Avery “Ace” Strickland, yet another freshman, opened the game with a triple, scoring on a throwing error, while also having a bunt single. Junior Emily Litrakis provided a first-inning sacrifice fly.

Winning pitcher Abigail Greene, a junior, allowed three runs, four hits and two walks with three strikeouts in five innings. “It wasn’t my best, but it was pretty good,” Greene said, adding her highlight was “the double play that I made” in the fourth inning.