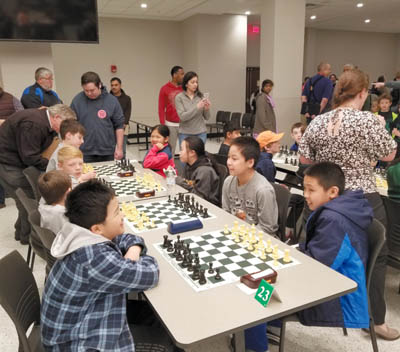 Farragut Intermediate School Chess team (at right), which included from back, Caroline Zhao, Sylvia Lin, Stephen Xiao and James Nugeyen, competed with other teams from around the state during 2019 Tennessee State Scholastic Team Championship Tournament.
Farragut Intermediate School and Hardin Valley Academy teams are leading the way in chess with wins at the 2019 Tennessee Scholastic Chess Team Championship at Tennessee Technology University on March 23.

With 64 scholastic teams competing, the FIS team, coached by Xiaopeng Zhao and consisting of Sylvia Lin,

and James Nguyen, won second place in the elementary

At least two of the FIS players — Caroline and Stephen — will continue on to the national elementary championship, which is slated for May 10 in Nashville.

“It was exciting and surprising because (their team’s) ranking was not very high,” Xiaopeng Zhao said. “It was a big surprise they won second place.

““They were really proud to represent Farragut Intermediate, and to bring home the trophy,” Zhao said. “I think this win will boost interest in chess.”

Zhao pointed out the March 23 tournament was the first time the team competed and placed.

“It was a surprise (because) some of the other teams had much higher rankings,” he said.

Before the state competition, the FIS team played in the regional tournament, which was March 2, and captured first place.

In addition to the March 23 competition, another FIS student, Abbie Liu, won second place for the kindergarten-through-sixth-grade division of the Tennessee Chess Association’s All-Girls state tournament, which took place Saturday, March 30, at University of Tennessee, Knoxville.

While they initially tied for second place in the state competition, Zhao said the team lost in the playoffs, finishing in third place.

However, he said the members were able to upset the top-rated team. And while the average rating is typically 1,700, HVA’s team rated 1,300.

“That win was also a surprise because they didn’t expect to beat the top team,” Zhao said.

As a new team that started last year, he said, “It was better than we expected.”

The team is hoping to host some regional tournaments in the future, Zhao added.