Suffering the loss of her husband, Goeser outlines 2nd Amendment mission to FG 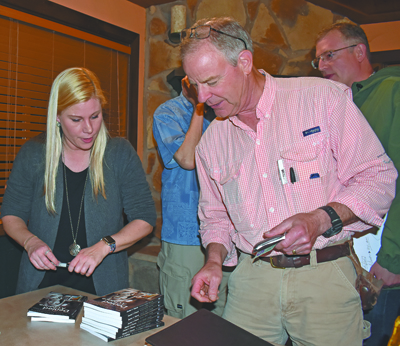 Former Farragut Alderman Bob Markli, one of the charter members of Farragut Gun Club, purchases “Denied a Chance” from author and Second Amendment activist Nikki Goeser, who spoke to the club Monday, April 8.
Nikki Goeser may have suffered through an unimaginable tragedy, but she is doing everything in her power to ensure neither she nor anyone else wishing to legally protect themselves will ever be victimized again.

The Second Amendment proponent who has helped overturn or reduce gun restrictions in three states, spoke to Farragut Gun Club Monday evening, April 8, sharing her story while selling copies of her book, “Denied a Chance.”

However, it did not save her husband, Ben, who was shot and killed right in front of her in 2009.

The couple, who were married a little more than 16 months, were in a Nashville-area sports bar operating a mobile karaoke business. State law at that time — which Goeser has successfully lobbied to change — did not allow firearms in establishments serving alcohol.

“I had to leave my legally-registered weapon and could not bring it into a place that served alcohol,” she said. “If you did carry and got caught, you could lose your handgun carry permit for life. So I followed the law.”

At the same time, however, Nikki was in the midst of being stalked by a man who first saw her at one of the bars where she and her husband provided karaoke.

“At first, I just thought he was a regular customer,” she said.

As they relied on social media to publicize upcoming events, she accepted his Facebook friendship request.

“At first, his messages seemed normal, but then they started to progress” in a way that made Goeser uncomfortable.

They had several months of respite, and didn’t see or hear from her stalker until the fateful night her husband died.

“I saw him, and just felt that something was incredibly wrong,” she said. “I knew I didn’t want him there, and I went to ask management to remove him.”

She describes the next minutes in frightening detail: she went to the kitchen to ask the managers to intervene. The stalker talked to Ben, but then disappeared into the restroom.

“I didn’t want him to see me, or know where I was,” said Goese, who stayed hidden beside the kitchen. “I had no way to protect myself.”

Then, as Ben was operating the karaoke machine, the stalker came up behind him.

“They told him he needed to leave ‘Now,’” she recalled. “But I was a firearms range volunteer, and I knew when I saw him unzip his jacket — I knew what that meant.”

The now armed killer shot Ben in the head, then struck him five more times.

But as horrifying as it was, Goeser realized she could not follow her immediate instinct, which was to run to Ben.

“How could I get to my husband?” she said, acknowledging doing so would put her own life at risk. “It would have been so easy for him to just shoot me, too.”

At that moment a U.S. Marine tackled the gunman and helped hold him down until police arrived.

Justice was slow to come: after a long and grueling three years, her husband’s killer was put on trial. Yet, “despite 51 witnesses, the judge dropped the charge from first to second-degree murder,” she said.

Ben’s killer was only sentenced to 23 years in prison, even after she gave a victim’s impact statement. “The judge told me that he didn’t make the law, he just carried it out,” she said. “It was like he was telling me to go back to the legislature and change the law.”

Goeser took on that challenge, working with Ohio and North Carolina officials to change their gun laws.

“As long as you have a handgun carry permit, you can now carry in restaurants that serve alcohol as long as you are not drinking alcohol and the owner has not posted a sign banning guns,” she said.

Goeser went on to testify twice in Ohio, and her written testimony was used before the North Carolina legislature, leading to the laws being changed in those states.

She also is currently working as executive director for the Crime Prevention Research Center, which collects data pertaining to gun laws and public safety, among its many functions.

Goesser said she continues to share her story to help people understand the significance of gun laws as they relate to law abiding citizens.

Her book is another way she is speaking out. She titled it “Denied a Chance,” which she said is what happened when she was unable to protect the lives of herself or her husband.

“We all feel pretty safe here (the group was meeting at Rosarita’s Restaurant along Lovell Road), and I don’t want you to be paranoid, but I want you to be prepared,” she said.

“I was prepared, but (most) laws stop the good people — not the bad guys.”

Even though Ben’s killer will have to serve his full sentence, Goeser is worried about the future.

But if there is a next time, she is more than ready, and won’t be “denied” ever again.