In his 21st year of service to FHS baseball, Skinner has pressbox named in his honor 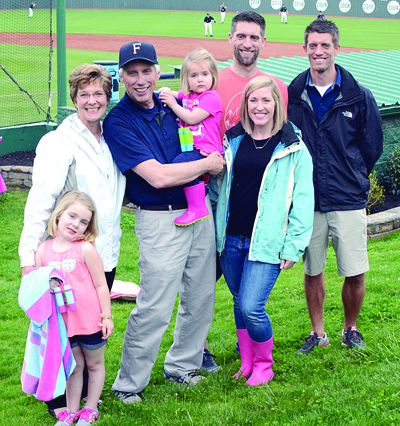 “The Voice of Admirals Baseball” Ralph Skinner, holding granddaughter, Mabry Skinner, 2, enjoyed a special day with his family at The Ballpark at Farragut/John Heatherly Field Saturday afternoon, April 13. Following the Admirals’ 11-6 baseball victory against Knoxville Catholic in the DeMarini-Diamond Academy Baseball Classic, FHS Dugout Club officials led a ceremony honoring Skinner, a program volunteer for 21 years, announcing the naming of Ralph Skinner Pressbox, which has been enclosed with air conditioning within the past 18 months. Joining Skinner was his wife, Susie Skinner, left, with granddaughter, Isabella Skinner, 4. To Skinner’s left are Chariti Skinner, daughter-in-law, and sons, Mark Skinner, left, (Chariti’s husband and the girls’ father), and Andrew Skinner.
Motivated by his self-proclaimed “love of baseball,” and equal love for hundreds who have bled Diamond Admirals Navy blue for 21 years, Ralph Skinner’s thousands of volunteer hours with Farragut High School baseball has paralleled the program’s explosive success dating back to 1999.

That’s when Skinner —“Voice of Admirals Baseball” as public address voice since 2001 and as play-by-play voice on WUCP-FM 99.9 since 2006 — saw oldest son, Mark, begin as a freshman first baseman under then head coach Tommy Pharr.

Two grown sons and two grandchildren later, Skinner and wife, Susie Skinner — herself a beloved assistant softball coach at Webb School of Knoxville — were among three generations on hand as Admirals Nation gave something back to “The Voice.”

With the program’s pressbox enclosed and featuring air conditioning within the past two seasons, it was formally named “Ralph Skinner Pressbox” during a ceremony at The Ballpark at Farragut/John Heatherly Field Saturday afternoon, April 13, following an 11-6 FHS win against Knoxville Catholic.

“To a person who is special in this program. … We can’t thank him enough,” said Matt Hagenow, FHS Dugout Club president, as emcee of the ceremony. “The Skinner family is a baseball family.”

“When we go places, people will ask, ‘how’s Ralph doing?’” FHS head coach Matt Bucker said after the ceremony about Skinner’s reputation even beyond program circles. “He’s a good guy and he’s totally invested in our program.”

Youngest son, Andrew, contributed as a middle infielder on the 2003 Admirals that finally won a state crown under Pharr.

Beyond the pressbox, “I was allowed to do a little coaching here, kind of on the side, informally,” said Skinner, part of nine state titles in his first 20 years as a volunteer.

“I feel like I’ve been handed the keys to the city,” Skinner said during the ceremony. “I have to thank so many people, and I have to start with coach Buckner. It’s an honor to be with you and be a part of the program.

“And thank Matt Hagenow, Brian Nussbaum (former Dugout Club president) and Jeff Birkholz (interior work on pressbox) and the magnificent work that’s been done on the pressbox,” he added. “And all of the parents and all the guys that have been a part of this. Coach (Donald) Dodgen (FHS athletic director). It’s just an amazing honor.

“And I want to thank my wife, Susie, for letting me come out to play.”