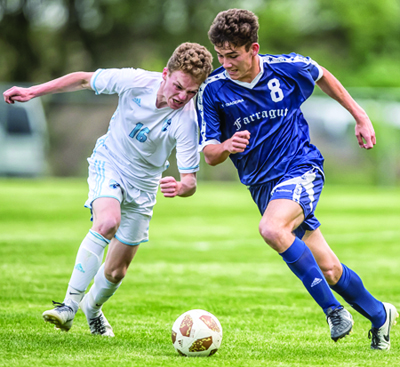 Nathan Miller of Farragut, right, and Hardin Valley Academy’s Zander Bolas come shoulder-to-shoulder looking to control the ball during this District 4-AAA showdown at HVA Thursday, April 11. The Ads blanked the Hawks 6-0.
Timi Omitaomu is one of Knox County’s most versatile high school soccer players, which enables Farragut head coach Ray Dover to play him on any third of the field.

Omitaomu, a sophomore, is truly a jack of all trades for the Admirals, and he has a passion for the game. But he really loves to play forward.

“I love to play up top because that’s where I really feel like I can help my team,” said Omitaomu, who scored twice Friday night to lift FHS to a 6-0 victory over rival Hardin Valley Academy in its District 4-AAA opener at Farragut Soccer Stadium. “On the first goal I scored, I was just able to get up the field.”

Omitaomu opened the scoring when he tallied in the 15th minute. From there, it was apparent the young and injury-plagued Hawks (1-8-3 overall, 1-2-1 in District 4-AAA) would face a long night against the Admirals.

“This is the first time that Farragut has gotten a (winning) result against Hardin Valley since 2014,” Dover said after Farragut improved to 9-2-1 overall and 1-0 in the district.

“The guys played pretty well, but we had some lulls in the game.”

Five players scored for the Admirals, who led 3-0 at the half, as markers came from Dillon Bihlmeyer (22nd minute) and Wes Jeter (just before the break).

Omitaomu made it 4-0 when he tallied in the 47th minute. Jake Lowe scored in the 76th minute before Avery Hathaway closed the scoring a short time later.

Admirals senior goalkeeper Brandon Keane made a pair of stellar stops in the second half.