95th Anniversary Tea set for May 9 at state HQ 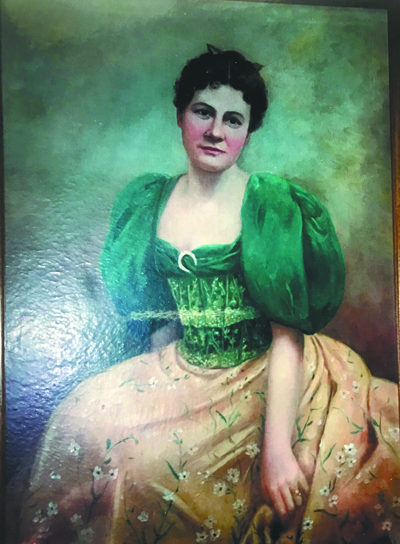 A portrait painting of Carolyn Scruggs Brown (then Mrs. John Scruggs Brown), Dixie Highway Garden Club’s first president, used to hang in University of Tennessee Student Center’s mezzanine, alongside her husband’s portrait, but have been removed. The Scruggses were staunch supporters of UT. “I wonder, today, what happened to those portraits,” said Linda Ford, DHGC second vice president.
Combining a love of flowers with their existing friendships, plus a need to grow their own food, 14 women were inspired in 1924 to form Dixie Highway Garden Club.

Now 25 strong, the members are gathering to celebrate their milestone with a 95th Anniversary Tea from 1 to 3 p.m., Thursday, May 9, at Ivan Racheff House and Gardens, 1943 Tennessee Ave., Knoxville — the state headquarters of Tennessee Federation of Garden Clubs.

“Our history is unbelievable for these 95 years,” said Ford, who has been a member since 1988.

Its members range in ages from 50 to 80-plus, and they meet the second Thursday of every month — except July and August — in Fox Den Country Club.

“It’s just a wonderful group of women,” Ford said. “We just treasure each other. It’s friendship, it’s learning, it’s floral designs — a lot of flowers and the environment, and all the things that we are interested in.”

“These little ladies formed a garden club in 1924,” Ford said. “They lived on Dixie Highway, which is now Kingston Pike.

”It took many decades before most garden club ladies started using their given names and not the names of husbands,” she added.

The early days were an era “when ladies were going out, it always meant wearing a hat and white gloves,” Ford said. “They were really aware of all the protocol that you have when you’re a group of ladies together.

That continued in Dixie Highway Garden Club through the 1940s.

“Back in the early years, those ladies grew things in the garden for food,” Ford said. “In 1924, it was not about flower shows and all this.

“However, they brought the desire to study and grow flowers, and they would, can and have competitions with other organizations on how much canned food they could make.”

And they stepped up to serve the community and shared their plants.

“That’s something we continue to do,” she said, adding the club participates in plant sales at the historic Ivan Racheff House and Gardens.

Now, however, “We’re more relaxed, we’re more jovial. We have so much more fun,” Ford said.

“We have, now, another group of women who are taking that challenge to keep this club alive and well,” she added.

“Our names are our own now, and we are not wearing gloves and hats to club meetings, but the dedication to the club’s motto, ‘Study Flowers — Grow Flowers’ still is practiced at our club meetings today.”

Club members take care of the entrance to Shangri-La Therapeutic Academy of Riding off state Highway 11, and they have a garden therapy project with First Baptist Concord’s Sonshine Group.

When Ford joined, she recalled, “I didn’t really especially want to be in a garden club, but I had some direction from some ladies who had been in it for years, and they asked me to come.

“So, I’ve enjoyed it for all these years,” she added. In fact, Ford took a leadership role, serving as president for five years.

One of Ford’s treasured memories is when the club held Alchemy: The Magic of Art and Flowers show with Farragut Arts and Beautification Committee (then known as Farragut Arts Council) in 2014.

“When we presented that flower show, it was absolutely magical,” Ford recalled. “It’s a big deal to put on our own show.

“That (flower show) won the highest award in the state,” she added. “We’ve won many awards, earning awards for its yearbooks and various projects.”