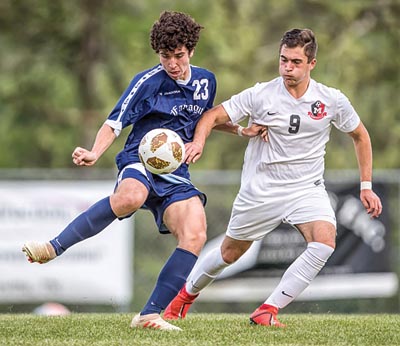 Farragut’s Avery Hathaway (23) passes despite Maryville pressure. The Soccer Ads rolled to a 5-0 win at FHS Soccer Stadium Thursday, April 18, to take charge of the District 4-AAA race.
Farragut High School boys soccer head coach Ray Dover knows he has a team laden with seniors and good leadership, and the Admirals got a jolt from one of their leaders in the middle of a huge game.

That jolt helped turn a close game into a Farragut rout.

In a crucial District 4-AAA home match against Maryville Thursday, April 18, Farragut held a 1-0 halftime lead — but many FHS players weren’t happy with the first 40 minutes. The Red Rebels (7-6, 2-1) were still in the match.

Pablo Herrera, who scored the game’s only first-half marker in the 18th minute, said it was senior goalkeeper Brandon Keane who delivered the inspirational speech at the break.

“Brandon got in there and got us all fired up,” Herrera said after the Ads blanked Maryville 5-0 before a spirited crowd at Farragut Soccer Stadium. “It was Brandon that talked at halftime.

Jake Lowe made it 2-0 when he tallied in the first minute of the second half. He would convert a penalty kick in the 47th minute to make it 3-0.

“I don’t think we have a lack of motivation, but sometimes we just need a little something to get us started, and we need something or somebody to tell us that it’s time to get going,” Lowe said.

The Admirals also got tallies from Wes Jeter and Aaron Smalling, who scored off a rebounded penalty kick.

Dover couldn’t have been happier after the second-half effort from his squad.

“I’ve told these guys that if we play with the appropriate energy level that we can beat anybody,” Dover said. “But if we don’t, anybody has a chance against us.

“The second half of that game was 40 minutes of Farragut soccer. That was 40 minutes and a second half that we really needed. In the first half, they weren’t letting us push up. They were playing smart because they knew that we had some big explosive weapons up top.”