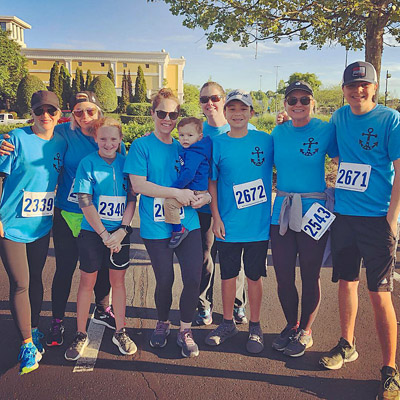 That large number was thanks in part to Jenny Martinez, who headed up a micro-team of her own in honor of her 16-year-old autistic son, Mikey, a sophomore at Farragut High School.

“We always look for ways to support and encourage acceptance and awareness for autism,” Jenny said, noting Mikey was diagnosed as a child. “One of Mikey’s brothers [Caden] is a sixth grader at Farragut Middle. When we saw that they were forming a team, we were excited to join and show our support for Mikey and others on the spectrum.”

When word got out, Jenny said many others signed up and “a dear friend of ours made shirts for our group that said ‘Team Mikey’ on the back.” Eight family members and friends were on hand for the special event, although several others who had signed up were unable to attend due to scheduling conflicts — including Mikey’s dad, Michael, and older sister, Ellyx, Jenny explained.

“We still had a great showing.” Jenny said. “It was a special morning for many and I hope the love and support was felt.

Caden ran in the race, while the others chose to walk, including Mikey, who said the “walk was nice, and it was fun to see everyone” who participated.

He said the event was important to him because he believes autism “is misunderstood, and I feel people should be more aware of it.”

Mikey said learning about autism is “very important,” and suggested reading about the topic or maybe finding others to teach on the subject as possible options.

Jenny encouraged self-education, too, along with cultivating interpersonal relationships with autistic individuals — a topic near and dear to her heart.

“You will benefit, certainly,” Jenny said. “I know anybody who gets to know Mikey does because he is such a neat and cool guy.

“He has so many friends who just adore him.”

Jenny said her family already is looking forward to participating in next year’s Breakthrough event, and getting to know more about the non-profit organization, which offers an array of services to adults with autism, according to its website.

Edmonds said FMS’s own participation in the Breakthrough Run/Walk for autism began with the school’s track coach, Chris Cavalaris, who encouraged his track students to run as a group a few years ago.

“Mr. Cavalaris asked me to run and I did, (then) we challenged staff to run the next year,” he said.

“This year, we asked our staff, parents and students to participate with the goal of winning the largest school group. It really just grew organically and it is such a good cause that it is really easy to promote and support,” Edmonds added.

“Our getting 87 people signed (up) is just a great testament to the caring nature of the FMS staff and our community of students and parents. It was just overwhelming to see the generosity.”