‘Changing of the Guard’ at Rotary Club of Farragut 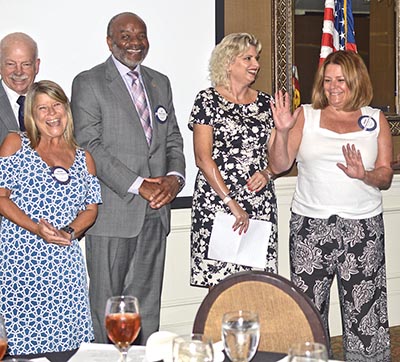 About Rotary International 2019-2020 District 6780 Gov. Greg Maciolek being on hand, “It’s an honor to have our district governor here today and to have him install our new officers and committee chairs,” Wilkerson said.

Bryson noted many of the committee members are continuing on while some are rolling off. He was commended for his leadership and dedication to the club the past year.

Wilkerson has been with the club for eight years.

“Back in 2011, Bettye Sisco invited me to visit the Rotary Club of Farragut, and I immediately fell in love with this club,” Wilkerson recalled. “I’ve been a member of other clubs previously, but I noticed right away there’s something very special about this club.

“The fellowship and service are exceptional and so unique, and this club feels like a big family,” she said. “This club does make a difference and the world. I’m very excited about the great things we’ll accomplish together this year.

“I would like for our club to try some new ideas that connects us even more with the community,” Wilkerson said as she presented this year’s Rotary theme, “Rotary Connects the World.”

One of her ideas is a reading program in an elementary school to encourage literacy and to strengthen the club’s partnership with Ridgedale School.

“I’m excited about our wine-tasting event this year,” she said as she thanked Rotarians Sam Taylor and Sam Mishu for their continuing to support the event.

“We started about the same time the Town of Farragut started,” he said. “We were sponsored by the West Knoxville Club, which is now Bearden.

“In terms of charitable giving, we had another great year,” Bryson said. “We were able to write quite a few checks for a bunch of different organizations — right at 20.”

Contributions for the year totaled $33,000 in donations for a lot of charities and organizations, which their representatives spoke to RCF the past year, along with others the club supports from year to year, he said.

“That’s from all the hard work in fundraising,” Bryson said, adding those organizations typically are local.

Additionally, he said contributions to the Rotary Foundation and Polo Plus exceeded the club’s goals and both were an increase from last year’s contributions.