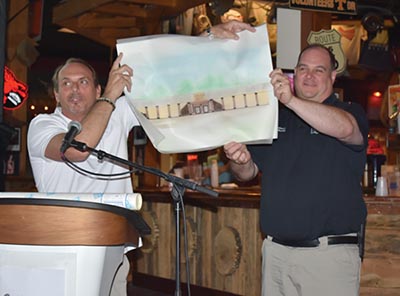 Cotton Eyed Joe owner Chuck Ward, left, holds up new façade plans for the nightclub with the help of Farragut Fire Marshall Dan Johnson during a June Greater Knoxville Hospitality Association lunch meeting.
One of Farragut’s best-known nightspots is undergoing quite a transformation under the watchful eye of relatively new owner Chuck Ward.

Well-known throughout the area for its antique décor, dance hall, live concerts and festive atmosphere, under Ward’s direction the Cotton Eyed Joe’s profile has increased exponentially, even coming to the attention of the Academy of Country Music, which voted it Club of the Year in 2018.

Ward unveiled new façade plans for Cotton Eyed Joe during a lunch meeting of the Greater Knoxville Hospitality Association in June, but said it is just the latest change he has brought to the site since purchasing it in late 2017 from long-time owner Gingi Bakri.

“I’m so excited about what we have done and what we are going to do,” he said. “We installed new AC units, updated the space for performers to hang out and have been polishing the floor and removing the carpet.

“We paved the parking lot, put in a shoe-shine stand and a new mechanical bull and also put in a new Sugarland ‘Shine Bar’ for Sugarland Moonshine,” Ward added while including one of the club’s sponsors.

In addition to making façade improvements, future plans also call for updating the facility’s restrooms and building a new stage for its live performers.

“Before all is said and done, I expect to have spent around a quarter of a million dollars,” Ward said.

The club’s atmosphere has caught the attention of a major network, which is considering filming a reality TV show on site, Ward confirmed. “I’m excited about that,” he said. “Even if they don’t end up buying it, we are thinking we might do our own show, maybe for the YouTube channel.”

“It’s been fun, and we’ve learned a lot,” he said. “I’ve got a great business manager who helps me.

“It’s like being at the fair every night. It’s great.”