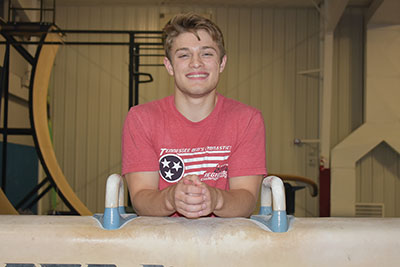 Rising Knoxville Catholic High School senior and gymnast Ethan Boder is headed for Italy next week as part of a contingent that will train with and compete against the Italian Junior National Team.
Though barely more than half over, 2019 has been an outstanding year for gymnast Ethan Boder.

After winning third place regionally with his team in the Elite Team Cup in February, then successfully taking second, third and 10th-place honors in the Men’s Junior Olympic National Championships in May, the rising Knoxville Catholic High School senior is headed to Italy next week as part of the Region 8 gymnastic delegation that will train and compete against the Italian Junior National Team.

‘It’s the hardest sport in the world,” Boder said. “You can’t just be good at one thing, you have to be well-rounded, and you have to learn to trust yourself.”

Boder’s work ethic sees him through endless hours of practice — upwards of nearly 30 hours a week during the summer months.

“You have to see yourself where you want to go,” he said in acknowledging the relentless path he has chosen, hoping one day it will lead him to Olympic glory. “I’m not always excited to be (at GymTek),” he added. “It’s hard to do all summer, every summer, but it’s worth it.”

Now 17, Boder has built up to that schedule over the last 15 years. He followed his big sister, Josie Boder, into the sport.

“He was under 2 when he started,” said his mother, Marti Boder. “His sister did classes and he just loved it from day one.”

While Josie moved on from gymnastics — she earned her own high marks as a member of the Tennessee Children’s Dance Ensemble, as has their younger sister, Rose — Ethan remains entrenched in the sport.

While Ethan has been a competitive gymnast since age 7, both he and his long-time coach, Matt Henry, said he “wasn’t always the best.”

“It’s not just about natural talent,” Marti added. “You have to be a hard worker, too.”

He has only had two coaches — the other, Brian Jones, only coached him briefly yet recognized Ethan’s potential before Henry took over.

While Ethan has been making strides and setting himself apart, he also is part of a well-trained GymTek team Henry has been coaching over the years, which include fellow KCHS alum Adler Bain (who recently earned a scholarship as a student/athlete cheerleader at the University of Tennessee) and rising junior Jacob Foster.

In addition to Marti, who teaches gymnastics herself to very young budding athletes at GymTek, Ethan’s father, Eric Boder, also supports not only his son, but his teammates and their coach.

“Matt is probably one of the best coaches in the country,” Marti said. “And I love watching the entire team when they perform. I feel like they are all my sons, I have watched them for so long.”

While Henry said at this point his role is more of guidance and counseling, he played a big part in challenging Ethan this year to improve on what the coach said has been his weakest event: the pommel horse.

As a result, Ethan’s pommel horse performances have cinched his biggest wins.

“One of the really cool things is how well he did on the pommel horse, since, typically, that (has been) the one event he is least naturally gifted at,” he said.

“During practices, he had to do the pommel three times in a row before he was allowed to do anything else, and it paid off — he qualified for the U.S. Championships,” Henry added, noting that competition will take place in August, and Ethan is the first from GymTek to qualify.

While looking ahead to college, Ethan soon will be eligible for Olympic competition.

Currently, however, there are only 15 collegiate Division I gymnastic programs, which includes the three service academies, he said, adding he had not yet committed to a university.