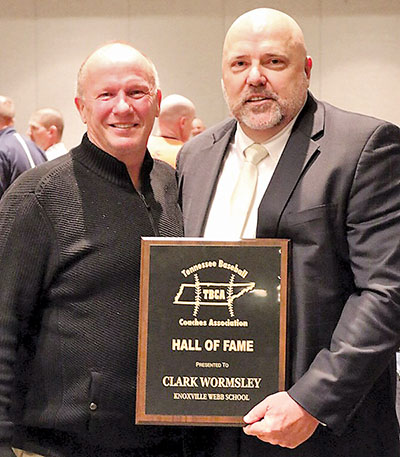 Dave Meske, left, Webb athletic director and football head coach, was on hand when Clark Wormsley, former Spartans Baseball head coach, was elected into Tennessee Baseball Coaches Association Hall of Fame in 2018.
KNOXVILLE — When the 2019 high school football season begins, one of Knox County’s longtime and most successful assistant coaches won’t be there.

Webb School of Knoxville offensive coordinator Clark Wormsley announced recently he is stepping away from the game after 35 seasons — helping produce seven Spartans state championships — as a fixture with his powerful winged-T offense.

Wormsley, who first coached the Spartans under Ron Gratz, had been with current head coach David Meske since the latter arrived at Webb in 1985.

“Dave is my best friend, although we haven’t always agreed,” Wormsley said. “He wants his program run a certain way, but he always gives you the freedom to do things the way you want to do them. He remains my best friend and I’ve been fortunate to coach with him.

“And I’ve been fortunate enough to spend all of my coaching career at Webb School,” he added. “I think Dave and I have been together longer than any head coach and assistant.”

As for his decision, “I started thinking about this at the end of last season,” said Wormsley, who will continue as Dean of Students at Webb Middle School. “Every year, Dave sends out the times that we’re going to get started. Every year, it gets earlier and earlier.

Wormsley also led Webb baseball to a state crown in 2010, as head coach for 25 years (assisted by Meske in 1987), while the assistant coach on the other baseball state title team in 1985.

Another personal highlight was his induction into Tennessee Baseball Coaches Association Hall of Fame in 2018.

His son, Jordan Wormsley, took over the Spartans’ baseball program and currently is head coach. Both Jordan and his brother, Parker, played baseball and football under their father at Webb.

Despite seeing his passion for football wane a bit, Clark said he’ll still be in attendance on Friday nights.

“We’ve had some great players that I’ve coached and I’ve had a chance to coach both of my sons in both football and baseball — and that was special,” he said. “I’m sure that I’ll miss the game, especially on Friday nights.

Also being part of three football state runner-up seasons, the elder Wormsley will be missed alongside the Spartans’ sideline.

“He’s been unbelievable and he’s been with me the whole time I’ve been at Webb School,” Meske said. “He’s my best friend and we grew up as coaches together.

“He’s a great football coach and he’s someone who loves kids, and he loves working with kids. He’s a great teacher,” Meske added.

“There’s not many times that you can say that someone has coached with you for 35 years.”