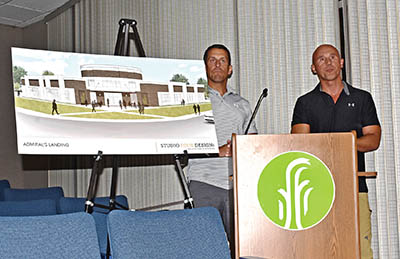 Co-developers Carlos Cortez, left, and Doug Justus showed off their initial concept plans for Admiral’s Landing — which would include mobile food vendors, a beer garden, outdoor patios and possibly an ice cream shop — at the former Phillips 66 convenience store.
Two young visionaries are hoping to transform the long-vacant Phillips 66 convenience store at the intersection of Campbell Station Road and Kingston Pike into a proper and welcome gateway for the Town of Farragut.

What they envision would combine food and entertainment in a family-friendly environment, encompassing a variety of rotating food truck vendors, along with at least two permanent on-site offerings they hope would include an ice cream shop and a beer garden.

Their plans, which were enthusiastically greeted by FMPC members, showed a roughly 9,000-square-foot building with a circular entrance-way and front patio that would set at the corner of Kingston Pike and Campbell Station Road. Two separate wings would be constructed fronting both roadways, with parking and an additional patio being located behind the building and out of sight of motorists.

The item was on the agenda for discussion purposes only, noted Community Development director Mark Shipley, who had been working with the pair after they purchased the property in November.

As their plans became clear, and realizing that currently food trucks are only permitted in Town limits as part of approved events (such as Taste of Farragut or the Lawn Chair Concert Series), Shipley said he wanted to bring the issue before FMPC for comments and input.

“I wanted to bring it before you to see if they were on the right track or if there might be any major concerns,” he said.

Justus said the rotating food truck idea would bring in vendors from all over Knoxville, and he knew of more than 50 from which to choose.

Justus and Cortez also stressed an emphasis on a “family friendly” environment, where adults could enjoy their meals or beverages, and children could freely roam in proposed designated play areas.

Although Commissioner Noah Myers Myers voiced safety concerns, especially in regarding to entry-ways on and off the property, “I’m super excited about this,” he said.

Justus said they are working with the adjacent property owner on accessibility.

“This is an awesome concept plan, and I know there are ways to work through any issues,” Myers added. “I think the citizens of the Town will like this.”

Justus and Cortez said they are still working on many details for what will be a lengthy project.

Justus estimated they will be back before the FMPC with firmer plans within the next three to four months.

In a move that potentially brings Top Golf even closer to building a new entertainment facility in Farragut, FMPC voted unanimously to approve amendments to the Farragut Zoning Ordinance and creating the Outlet Drive Regional Entertainment and Employment District (OD-RE/E). It would replace the current C-2-R/W District, but has to be voted on and approved by Farragut’s Board of Mayor and Aldermen. Shipley said the matter could come before that board as early as Aug. 8.

During a lengthy discussion and public hearing, FMPC ultimately voted to allow ORNL Federal Credit Union to begin updating and renovating its branch at 11405 Municipal Center Drive, but it denied the company use its planned shade of blue on an exterior wall and drive-through stations.

The vibrant shade, which was described as ORNL’s corporate color, was determined not to be among the Town’s approved shades in its Mixed Use Town Center provision.

“In person, it looks like it is neon blue,” Myers said. “My feeling is that is not approved under the MUTC.”

“I struggle with the architectural review guidelines, and [knowing] that it the trademark color for them,” said Commissioner and Vice Mayor Louise Povlin, who later cast the lone “no” vote against the measure. “ I understand what we are trying to accomplish, but I struggle with this.”

The FMPC did concede the color could possibly be mixed in with its signage as a compromise.

“In the Mixed Use Town Center portion of the Town (as shown on the future land use map) a more traditional (and timeless) earth tone and muted color provision is desired,” added Shipley in a follow-up interview. “The bright blue was seen by some as an advertising device and out of character with the earth tones desired in the town center area.

“As a compromise it was offered that the blue could be used as background within an approved building mounted sign.”

Lynn Holt, vice president of Facilities for ORNL, said he would be discussing the issue further with the company’s CEO for future guidance on how to proceed.