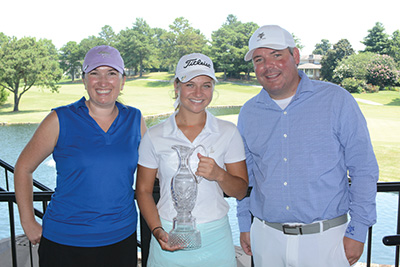 “Thank you for letting me play in this tournament. It was really fun,” Keeling, a rising sophomore golfer at Lipscomb University in Nashville, said in a speech before the group after defeating Gilliam in the 18-hole match play finals 4 & 3 early Friday afternoon, July 26.

“Thanks to you all for being so nice and welcoming,” she added. “And thanks to Danny (Ackerman, FDCC head golf professional who ran the tournament).”

With both young women former Farragut High School star golfers, Keeling said, “I think it’s been about three or four years since I first played in it with Carolyn.”

As for being Championship Flight title holder and under age 20, Keeling’s older sister, Elizabeth Keeling, did the same thing in 2014.

In First Flight, the top spot came down to a FDCC pair who play together regularly in dual-pairing events.

Kathy Kruse rallied from being 4 down after nine holes against friend Janet Greene in Friday’s match play showdown, winning five straight holes to go 1 up after 14.

After being all square following 18 holes, the duo decided things in a sudden-death playoff at No. 1 hole. A clutch putt from Greene was the difference.

Although saying she’s a competitor, Kruse added she “could handle losing to Greene.”