Three for the ‘Hall’ 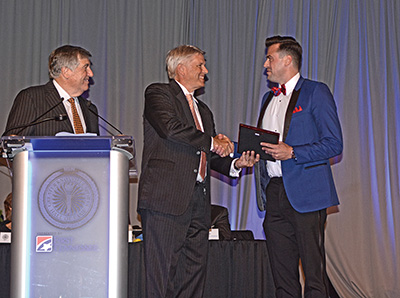 Wade Chapman of Farragut was proclaimed “one of the truly great golfers in Knoxville history” and “one of the top teaching pros in the nation” by “Voice of the Vols” Bob Kesling, GKSHF Dinner and Induction Ceremony emcee, during Chapman’s Hall of Fame induction in Knoxville Convention Center Thursday evening, July 25.

“A two-time Tennessee PGA Player of the Year,” Chapman “has played on the PGA Tour, in the U.S. Open and the PGA Championship,” Kesling added. “… He has played in seven Majors on the Champions Tour.”

Kesling, himself a Farragut resident and GKSHF member, also labeled Dave Meske, Webb School of Knoxville head football coach since 1985, “one of the winningest coaches in Tennessee high school football history” in front of an audience packed with fellow GKSHF members.

While also serving as Webb athletic director since 1995, this Wisconsin native earned KIL Coach of the Year honors leading the Spartans wrestling program in 1998, while also having served as boys and girls track head coach and assistant baseball coach.

Perhaps most importantly, Meske “also is a retired major in the U.S. Army Reserves, and served in Desert Storm in 1991,” Kesling said. “We thank you for that service.”

Another Spartans all-time great, Olympic gold medal swimmer Davis Tarwater (London Olympics 2012), “is one of the most decorated swimmers in Knoxville history,” Kesling told the audience.

Leading Webb School to a state championship in 2002 while setting three state records — and being named state High School Swimmer of the Year — Tarwater took his talents to the University of Michigan in Ann Arbor.

As a Wolverine, he won NCAA national titles swimming the butterfly.

“Davis qualified for the World Championships three times, winning gold in 2009,” he added. “He set the American record in the 200-(meter) butterfly in 2011.”

“It’s a special honor to go in here with my long-time friend, Dave Meske,” Wright said.

Illustrating just how far both have come as coaches, Wright said, “Dave and I were roommates when Dave became head coach at Webb and I came to Fulton.

“And we kidded amongst ourselves, ‘what are the odds, the chances, that the two losingest coaches are roommates?” he added with audience laughter.

Casey Collier, Webb School Class of 2019 All-state point guard and 2019 Miss Basketball in Division II-A, was named one of two GKSHF Female Athletes of the Year.

She also earned TSSAA state tournament MVP honors in 2018, helping lead the Lady Spartans to state titles in 2015 and 2018 and a runner-up finish in 2016.