A ‘walk-friendly’ Northshore is Jay’s goal on Commission 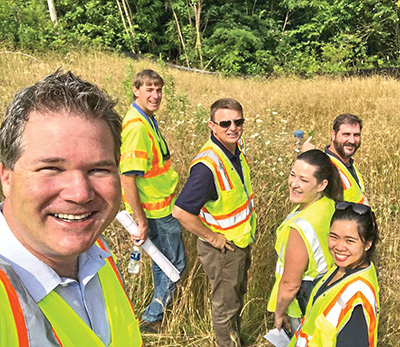 Knox County At-Large commissioner Larsen Jay, left, helped draw out phase I of the new Northshore Drive greenway trail along with, in back from left, Chris Sharp, designer with Knox County Engineering & Public Works; Jim Snowden, KCEPW director; and Brad Warren of KCEPW. In front are Shauna Godlevsky, left, with Knox County Parks & Recreation, and Vi Tran of KCEPW.
Incoming At-Large Knox County Commissioner Larsen Jay had not even taken the oath of office last summer when he saw something that truly scared him — and realized he needed to do something about it.

“I was visiting friends who lived off Northshore, and I was just past the Cove (at Concord), when I saw a family, who looked like they were headed to the park, walking, and in the ditch along Northshore,” he recalled.

“I was terrified to see this family walking within 5 feet of cars going 50 miles per hour.”

Jay talked the sighting over with his friends, all of whom admitted they, too, had done the same thing.

“‘We’ve all tried it once, but would never do it again,’” he said they told him. “They said it was dangerous and scary.”

Jay did some research and quickly discovered “there are over 10,000 residents within one-and-a-half miles of the park who can’t get there without getting into a car.”

“The Cove is the most used Knox County Park,” he added.

“It is amazing, and awesome, but it is isolated from many of its closest neighbors.”

Moreover, he also realized he was right to be frightened for that family he saw trying to access the park, as statistics showed more than 30 percent of all accidents along Northshore Drive from 2015 to 2017 were single vehicle non-collision accident.

“Which means a lot of those were accidents where they just drove off the road,” he said.

Jay began to formulate a plan that would utilize some of the few existing walkways and trails and create new ones as well.

“To me the whole project is safety first, connectivity second and wellness third” Jay said.

The project, which will be spread out into three phases, proposes greenways and walking trails that will eventually connect two “very dangerous stretches of Northshore Drive for neighbors and pedestrians,” according to its documents.

Ultimately, a greenway would be established between the Choto Road roundabout and Cove Park, as well as extending the existing greenway at the east end of Northshore Drive bridge to the Concord Road roundabout — with Concord Road currently undergoing a two-year Tennessee Department of Transportation expansion.

“Anything we can do to make our parks more accessible is a win-win for everyone,” he added.

Phase 1, which is expected to cost “about $150,000,” Jay said, will tentatively begin later this month, and will bring a walking trail west from the Concord Road roundabout into a portion of Concord Park located on the right side of Northshore Drive.

He said the other two phases of the project will pose some challenges.

“What we are working on is to bring a walkway off of the bridge, that would possibly wind under both bridges and keep people from having to cross Northshore,” Jay said. “Theoretically, when it is all completed, you could go from Choto all the way to Turkey Creek.

“I’m really excited about it,” he added. “It’s really going to be awesome for folks to be able to safely get to our wonderful parks without having to get into a car or worry about losing their lives.”