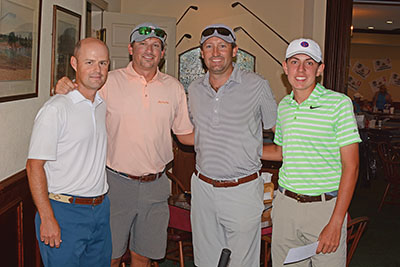 Addressing dozens of four-player teams (18-hole best-ball format) who waited to begin play on a sunny Thursday afternoon, Aug. 1, at Willow Creek Golf Club, Wyszynski said her father “would have such nice comments to the (Concord/Farragut) Sertoma Club for coming up with this idea.”

A Knoxville resident, Mr. Nelson was the “Voice of the New York Mets” during the “Amazing Mets” World Series championship season of 1969 and was known for his “We move to further action” phrase as Sunday TV highlights host of Notre Dame Football long before the Fighting Irish were regularly seen on live television.

Proceeds from the event benefitted Sertoma and Friends of Tennessee Babies.

Flight A champions pictured below.