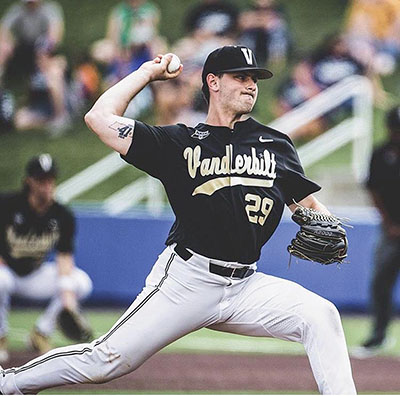 Former Farragut Admirals star pitcher Patrick Raby, Vanderbilt’s all-time leader in pitching victories, fires plateward for the Commodores in 2019 en route to an eventual national championship.
GREENEVILLE — Patrick Raby is getting his chance to do what all baseball pitchers dream about.

Raby, a 2015 Farragut High School graduate, starred on the mound with the Admirals in high school and was staff ace on the 2014 Class AAA state championship team — and from there it was off to Music City and perennial national power Vanderbilt.

Raby not only left Nashville contributing to a Commodores national championship in 2019, he also set the school record for wins at Vandy with 32.

Highlighting his playoff accomplishments was pitching two scoreless innings (the winning pitcher) versus Duke in the NCAA Super Regionals deciding game, which allowed Vandy to punch its ticket to Omaha and the College World Series.

“The thing that was special about that game was that it was my and the rest of the seniors’ final home game at Vanderbilt, at Hawkins Field, and it was a great way to go out,” Raby said. “I talked to (Vanderbilt head) coach (Tim) Corbin after it was all over, at our exit meeting, and told him how special it was to do that for us.”

Rallying in the best-of-three College World Series championship round versus the Michigan Wolverines to complete its 2019 Cinderella story, Raby and many of his teammates had precious little time to celebrate their huge accomplishment.

The ex-Admirals star was one of a school-record 13 Vanderbilt players drafted in June’s Major League Baseball Draft.

“It was a dream come true and some of my teammates knew that I got drafted even before I did,” said Raby, who was selected in the 17th round (504th overall pick) by the Cincinnati Reds. “It was actually a pretty fast process. I grew up a Braves fan. Here you’re pretty much a Braves fan or a Reds fan and that’s it.

“But this is a dream come true and this is what everybody in baseball wants and I’m just going to try to make the most of this opportunity,” he added.

While spending four years in Nashville, Raby had a stellar career facing some of the nation’s top hitters while pitching in the rugged Southeastern Conference.

Raby is one of two recent Farragut grads to play for the Commodores. He followed Philip Pfeifer (FHS Class of 2011) to Music City.

Now, Parker Noland will play there after the All-state infielder led the Ads to the 2019 Class AAA state championship.

And Raby thinks Noland, who turned down lots of money from the Miami Marlins to play in their farm system, will do just fine in the SEC.

“I guess we’re just keeping up the tradition,” Raby said. “Philip went. Then I went and now Parker is going. I know him a little bit and he’s a great player and a great kid from everything I’ve heard.

“... If he continues to just play his game, he’ll be fine. He can play with those guys.”

Raby won’t be around to help Noland. He’s now pitching for the Greeneville Reds in the Appalachian League. He made six appearances for the Reds’ Rookie League Affiliate (all in relief) and had a 2-1 record (11.1 innings) through Monday, Aug. 5

“It’s different from Vandy,” Raby said. “Our facilities in Greeneville (at Tusculum University) are some of the best in the league. But still, it’s like going from luxury to not-so luxury, I would say.”

Raby will always have fond memories of his time with the Admirals and FHS head coach Matt Buckner. “He always wants to see people get the best out of their ability and he always prepares you for life after baseball,” Raby said of Buckner. “He’s like a second father to us. Any time I’m home, I call him and we have lunch.