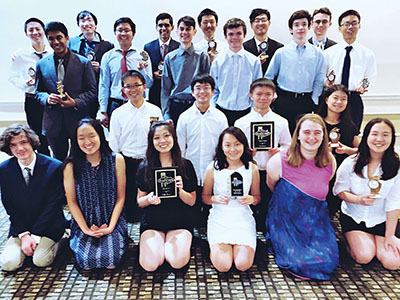 FHS’s MAØ team spent the week with more than 50 other teams as schools tested for four days straight, vying for a top spot, stated MAØ member Kelly Su in a press release.

Farragut’s team, which included students and teachers, took home a hard-earned 10th-place in the nation despite “a multitude of mind-boggling questions,” she said.

The high finish is “a phenomenal placement for a public school,” said Kelly Gruhn, FHS math teacher and MAØ sponsor.

Another highlight was when Bal was elected as MAØ national officer, serving as parliamentarian this coming year.

She stated a notable squad of Admirals at the competition was Zhou, Fang and Erika Yang — seniors from the Class of 2019.

Behind those seniors, the team organized a multiple school events, aided countless staff and inspired many underclassmen, Su stated.

“From instructing for hours to answering the never-ending questions of her students, Mrs. Angela Buckman has not only been a teacher, but also a mentor, therapist and friend,” Su stated. “She is not only unbelievably passionate about math, but (she) also heavily advocates for speaking up and maintaining curiosity. She knows her students like the back of her hand — when to laugh with them, when to comfort them and when to question them.”