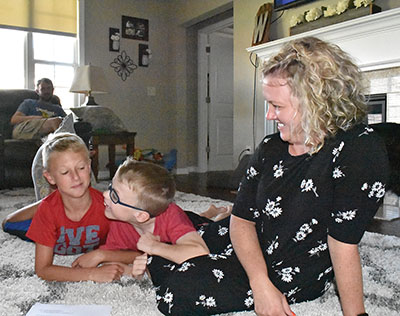 Lindsay Willis watches her sons, Jackson, left, and Ben, wrestle and play in their Farragut living room.
Ben Willis is used to being a trailblazer, and this fall will be no different.

The youngster, who has the distinction of “opening” a new classroom at Farragut Primary School, is accomplishing the same feat at Farragut Intermediate as the new school year begins.

Ben — one of only 11 individuals worldwide with a rare genetic disorder known as GPAA1 — has multiple disabilities, but they have never stopped his keen intellect, engaging smile and bubbly personality from shining through.

Nor have they diminished his need for continuing education within his own community, a right his parents have fought hard to realize.

“This has been extremely important to our family because Ben — and other students like him — deserve to go to their neighborhood schools,” said Lindsay Willis, who along with her husband, Alan, worked tirelessly with Knox County Schools to ensure a CDCA classroom, offering higher levels of student support, was offered in Farragut. “They deserve to grow and learn alongside their siblings, neighbors and friends.”

The couple initially was told Ben would have to attend A.L. Lotts, a school that already offered a CDCA class, even though they lived off Turkey Creek Road.

“They had not had this type of classroom (in the Farragut schools) before Ben came along,” Alan said.

“My husband and I pushed for it,” Lindsay said. “We regularly followed up with the teams at the schools and the Knox County Special Education department. We had regular communication with Knox County urging them to help us put a classroom at Farragut.

“There were numerous kids in our district who were sent to other schools that could have attended at FPS,” she added. “I think we helped kick-start the conversation and prompted them to really look at the numbers. There were enough students who needed a CDCA classroom in Farragut to justify a new classroom.”

Ben, along with four other qualified students, were the first to use it, and those same students will be joining Ben at the new CDCA classroom at FIS, his mother said.

“They were nothing short of amazing,” she said. “They have gone out of their way to create an inclusive environment at the school and they go above and beyond for their students on a daily basis.”

The years at FPS found Ben easily maneuvering — via wheelchair and sometime using an adaptive bicycle — the hallways, and interacting with students throughout the school, as CDCA pupils

split their school days between it and regular classes, Alan explained.

“The friendships Ben has made have been so special,” Lindsay said, noting one little girl would arrive early every day just so she could help Ben.

“She was always waiting for him when he got there,” Ben’s mom added, then mentioned another classmate who “knew he liked gummies, so she made sure he had some.

“He is making friends I know he will be able to have, all through to high school,” Lindsay continued. “It is what we want for him — that environment of inclusion.”

While Ben is not yet verbal, he does use a specially-adaptive pad, a Nova Chat, which enables him to communicate with those around him, even though his cheeky sense of humor got him in a bit of hot water one day in class.

“His teacher asked the class to quiet down so they could earn a marble for their good behavior jar,” his father recalled with a grin. “The classroom was quiet when Ben pushed the button for the phrase, ‘I don’t like that!’”

The family, which includes older son, Jackson, who is a rising fifth grader at FIS, is looking forward to the new year ahead as the brothers, who are extremely close, their mother said, will be attending school together.

Last week, the family met FIS principal Deborah Adorante “and the amazing team at FIS to see Ben’s new classroom,” Lindsay said. “We could not be more pleased at how they have welcomed us.

“And Ben couldn’t be more excited — he loves school,” she added. “We just can’t wait for the new year to begin.”