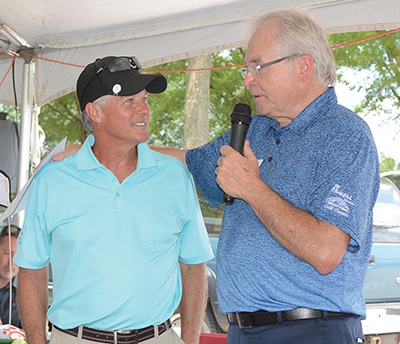 Dan Anderson, left, was the first Mission of Hope Golf Classic participant in 16 years to pocket a hole-in-one (No. 6, 157 yards using a 5-iron). Emmette Thompson, M of H executive director, recognized his accomplishment in a post-event ceremony.
Since 1996, Mission of Hope has assisted impoverished Appalachian children in 28 rural elementary schools (more than 12,000 students) in upper East Tennessee, Southeast Kentucky and Southwest Virginia.

Mission has since expanded its reach to reward scholarships

One of Mission’s most successful fundraisers has been held annually in Farragut since the early 2000s.

Perhaps the highlight of this day was an M of H Golf Classic first: Dan Anderson nailed a hole-in-one on the par 3 No. 6, using a 5-iron from 157 yards out.

On top of his regular prizes for being “Closest to the Pin” at No. 6 during the morning session, Anderson also won a set of golf clubs.

Straightest Drive on No. 3: Roger Bohanan; Closest to the Pin No. 2, Nathan Howard; Closest at 11, Brett Taylor; and Closest at 14, Brad Bartlett.

For more photos from this event, please see Westside Faces in our print edition.