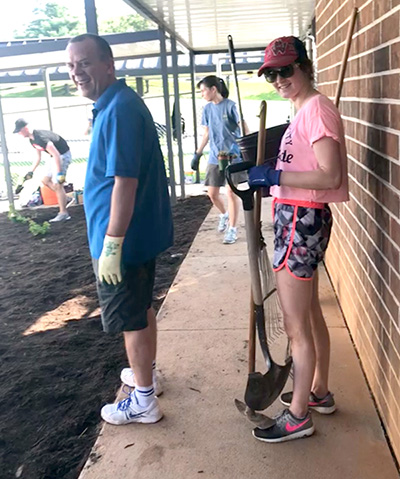 They also cleaned and prepared classrooms at Wesley House and provided food for FPS students in need through Compassion Ministries.

“They were busy and accomplished much,” said Teresa Pratt, Christ Covenant director of media and design. “There were tears on both sides (when the team left).

“It’s like we’re coming to our second home,” Agnew said about the team’s latest trip to Farragut. “We’ve made good friends over the years.”

The collaboration between the two churches has been a “partnership in the gospel of Jesus Christ, where we come together with our various talents and personalities to work together to proclaim Jesus as Lord and Savior and show his love to those who are in need in our communities,” Agnew said.

Led by Agnew and his wife, Tracey, the team consisted of young people ranging in ages from Agnew’s 10-year-old twins, Jacob and Joy, to the oldest, a 22-year-old woman.

“I suppose it is good to bring our young people to experience personally a different culture,” he added. “While we speak a similar language, we are very different in our outlook in life and our lifestyle in general.

“It’s also good for us to experience a Presbyterian church in a different culture. We believe the same things about the Bible, but we do things in a different way.”

The trip also allowed team members to be involved in practical ministry, which he said, “We may not do at home.”

Agnew noted their trip has been positive.

“Everyone has been challenged by the situations they encountered,” he said.

“That opened up new avenues of ministry with Christ Covenant,” he said.

A year later, a team from Christ Covenant Church visited the Monaghan church.

“It was at that point we discussed bringing a team here to Knox (County),” he said, adding that first trip to Farragut took place in 2014.

“We’ve been going back and forth ever since,” Pratt said.