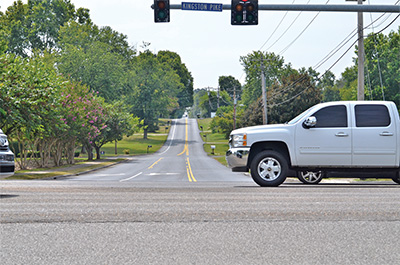 Paving and lane reconfiguring along Peterson Road was completed last week, but some Kingsgate residents, unhappy with the finished product, contacted Town Hall and took to social media voicing their displeasure with what are now two 9-foot travel lanes, along with a 4-foot bicycle/pedestrian lane.

Farragut officials had offered the new roadway plan earlier this year as a possible solution to residential complaints of excessive speeding. Peterson Road is considered too steep in places for traditional traffic calming measures, such as speed humps, and officials suggested if the lanes were reduced in width, and a bike lane/walk lane was added, it would offer some relief while forcing drivers to curtail their speeds.

However, the finished product led to many residents complaining the lanes were too narrow for safe passage and, initially, claiming some striping was haphazardly painted.

Kingsgate resident Randy Rabidue stated on Facebook, “It’s not wise to put 9-foot wide lanes on a road when your average full size truck is 8 feet wide from mirror to mirror.” He further noted many mailboxes along Peterson “(sit) flush with the curb if not into the road 1-to-3 inches (depending on installer).”

However, at least one Kingsgate resident, Ayla Bryant, weighed in on nexdoor.com last week and said, “I drove (Peterson Road) this morning. No issues with it whatsoever. I did realize it kept me going right at about 25 (mph), especially when I passed oncoming cars ... so it’s doing what it’s meant to at least somewhat.”

Several Facebook commenters mentioned attending the regular Board of Mayor and Aldermen meeting Thursday, Aug. 8, but Becky Smits was the lone resident who appeared to voice her concerns.

She and her family previously lived along West Kingsgate Road in Kingsgate for 16 years, but three years ago moved to Banbury Road in Turkey Creek Woods, which is in the back of the subdivision.

Safety was Smits’ main issue. Driving along Peterson after the work was completed, Smits said she “couldn’t stay on my side of the road without (almost) sideswiping mailboxes.”

She also asked about the sizes of the lanes, which Town engineer Darryl Smith said were drawn according to standards set forth by the American Association of State Highway and Transportation Officials.

Vice Mayor Louise Povlin pointed out because a speeding problem did exist on Peterson, and five bus stops are located along that road, the Town had an obligation to address the issue.

“There is no right-of-way, and it would require agreement from (at least) 30 homeowners to build a sidewalk, so we looked at the next best possible solution,” she said, pointed to the resulting plans for the 9-foot lanes, 4-foot bike/pedestrian path and its 2-foot buffer.

At that point, Smits said, “It is my understanding (from studying the ASSHTO guidelines) that there should be a 2-foot buffer on each side of the roadway.”

Smith said, “I would have to look back at that, but it is my understanding that it does meet ASSHTO guidelines.”

Smith did say striping the road “was a problem, but the issue was promptly corrected the following night by the Town’s striping contractor.”

“We are working through this, it is a tough situation,” Povlin said. “Some people may need to move their mailboxes — that might be the solution we need.”