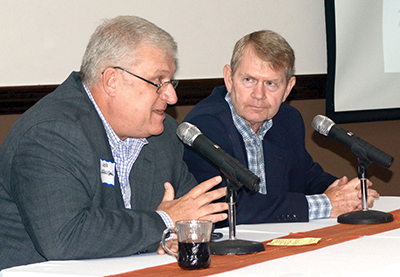 Jeff Jarnigan, left, public address voice of Neyland Stadium (UT Football) and Thompson-Boling Arena (UT Men’s Basketball) and a popular long-time Knoxville radio personality, makes a point as Jimmy Hyams, a Tennessee Sportswriters Hall of Fame member and two-time state Broadcaster of the Year honoree as a radio talk-show co-host, listens. They were featured during Farragut West Knox Chamber of Commerce’s Breakfast Speaker Series Tuesday morning, July 30, in Rothchild Catering & Conference Center.
Turning from more serious topics to the lighter side — the light orange of the Tennessee Volunteers and its upcoming football season — the most recent Breakfast Speaker Series hosted by Farragut West Knox Chamber of Commerce was a double dose of vocal and analytical talent.

The duo gave introductory information — much of Jarnigan’s was about his public address history with UT, while Hyams gave a nutshell bio then mostly spoke about the popular topic of the Vols Football outlook for 2019.

Both men then fielded audience questions.

• As for predicting UT Football’s win estimate, Hyams said he heard one prediction earlier that day of eight victories.

“I’m not quite in that realm yet, and that’s because of the line of scrimmage,” he said. “I just don’t think Tennessee is good enough on the offensive line and defensive line to win eight games.”

Offensively, “The key is going to be whether or not Trey Smith is going to be able to play,” Hyams added about the standout offensive lineman, a junior, who is recovering from a blood clot requiring, reportedly, he take the blood thinner Coumadin. “He’s doing everything he can to try and get out there and play.”

With that question mark, “I think Tennessee is going to start two true freshmen at tackles,” he said about offensive linemen Wanya Morris and Darnell Wright.

(Since Hyams address, the Vols have lost projected starting defensive lineman Emmit Gooden, a senior, to a season-ending knee injury).

In addition to graduation from the 2018 Vols seniors, “They’ve had a lot of transition on their football team,” Hyams said. “… A lot of people have left, had medical redshirts.”

However, “I like Tennessee at quarterback, at receiver, at running back, at tight end,” Hyams said. “I like their linebackers and their secondary.”

• Moreover, looking ahead to the 2020 Vols, “I think next year they’re going to be really good,” Hyams said. “They’ll be better on the line of scrimmage … .”

• Concerning his bio, “I got started writing in a newspaper when I was 13 covering ballgames. When I was 16 I was a sports editor,” Hyams said.

“I thought, ‘well, this is going to be a pretty neat adventure.’

“Since then I’ve had a gun pulled on me, I’ve had my life threatened and my apartment ransacked,” he added.

• “Doing basketball, when you hear me doing Tennessee, everything Tennessee does is off the chart: (getting the Vols crowd to) scream, yell, shake the shakers, raise the roof,” said Jarnigan, Voice of Thompson-Boling Arena since Bruce Pearl’s first year’s as Men’s head coach (2005-06). “When Georgia scores it’s like, ‘‘Georgia scored’ (explaining in a matter-of-fact voice).

• Jarnigan took over as Voice of Neyland Stadium for the late Bobby Denton, also radio colleagues, beginning with the 2014 Vols season.

“We fought like cats and dogs over radio ratings all week, but in the (public address) booth Bobby was as good a friend as you could ever have,” Jarnigan said. “… A class act. I thought the world of him.”

• First becoming the public address voice of UT’s The Pride of the Southland Marching Band sometime in the early 1990s, Jarnigan said he got “to travel all across the country.”

Of special note was South Bend, Indiana. “If you ever get a chance to go to a game at Notre Dame, do it; it’s the greatest road experience, bar none, I’ve ever had,” he said. “I’ve been to the Rose Bowl, I’ve been to all of them. But Notre Dame is as classy as it gets for a visitor.”