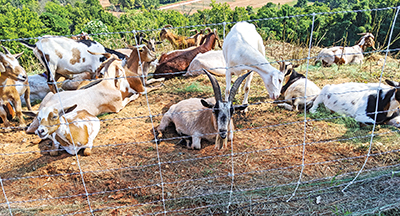 Farragut newcomers Joe and Crystal Murphy and their daughter, Teagan, moved to Vista subdivision earlier this year from West Virginia, and immediately had to deal with rampant Kudzu that was encroaching on their property. They hired the services of “Rent a Ruminant” out of Clarksville. which provided a herd of goats to tackle their Kudzu problem earlier this summer.
Joe and Crystal Murphy thought they had found heaven on earth two years ago when they began building their dream home in Farragut. What they didn’t expect, however, was to come face-to-face with a threat of epic proportions — the cursed kudzu.

Being originally from New Jersey, the couple admitted they never even heard of the pervasive plant, originally brought stateside from Japan in the 1920s to help with soil erosion, when they purchased property in Vista subdivision, just off Virtue Road.

Joe had retired from a law enforcement career, and the couple was looking for their “forever home” when they found the 2.9-acre tract.

“All we knew was that we wanted to live in a small neighborhood,” Joe said. “We wanted land, and we wanted to be close to things.”

“What we love about this place is that you have everything you could ever need, but still feel like you are in your own little world,” Crystal added.

They began building their home and traveled periodically from where they were living in West Virginia to check on progress. Their property included 25 percent ownership of a rock quarry adjacent to their land, and from somewhere deep inside it, the kudzu sprung up, seemingly overnight.

“It started in the quarry and multiplied in just a matter of months into the woods behind our house,” said Crystal, who noted the couple finally moved into their home earlier this year.

Once it spread, the couple began researching the matter to determine what could be done.

The answer was not much.

“No one wanted to touch it,” Joe said. “We talked to landscapers and arborists. Everyone knows how hard it is to deal with, and everyone would recommend someone else.”

The few professionals who did offer to help keep the kudzu at bay wanted thousands of dollars to excavate or clear the property, yet offered no guarantees, Joe said.

“We had some people tell us ‘just to let it go,’ but we couldn’t do that,” Crystal said.

One constant, however, was the suggestion of a natural solution.

Once again, the couple delved into research and discovered “Rent a Ruminant,” which is located in Clarksville and operated by Jax Taylor and her husband, Matthew Regynski.

The Murphys met with Taylor and elected to hire her and her fleet of 60 goats, which she brought out for 14 days earlier this summer at a cost of $250 a day.

The goats spent their days eating the kudzu under the watchful eyes of two dogs: a herder, named Tag, and a protector, named Maddie, both of whom live with the herd.

“They were really quiet,” Joe said. “You didn’t even know they were there.”

The goats made quick work of the task and were able to clear the couple’s back yard in less than four days.

“They can clear a half acre a day,” said Crystal, who said she “enjoyed having the goats here. Our daughter (Teagan) did, too. It was an awesome experience, and I would love to have them here all the time. I miss them.”

She may not have to, as the couple is thinking about bringing them back later in the fall and have offered the option to the Vista Homeowners Association to address shared spaces covered by the plant.

In the meantime, utilizing the goats “gave us a start and a fighting chance to get rid of the kudzu,” said Crystal, who noted the plant can grow up to seven inches a day.

“We know a lot more about dealing with kudzu than we ever wanted to,” she added.

“But this is an awesome property, and an awesome neighborhood, and we sure don’t want to lose it.”