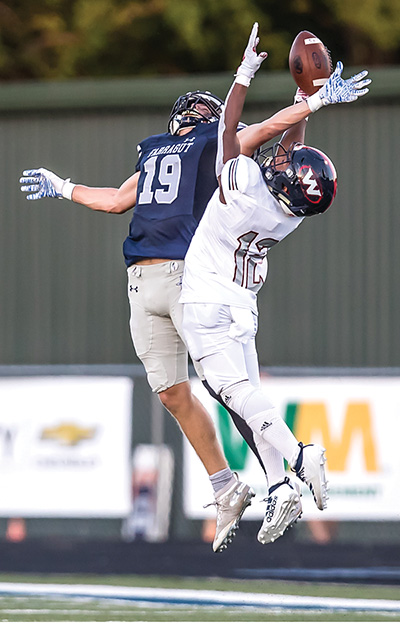 Logan Foody, 19, Farragut junior defensive back, deflects this Knoxville West pass during the Runnin’ Rebels versus Admirals battle at FHS’s Bill Clabo Field Friday evening, Aug. 20. West ended a 22-game Admirals home winning streak with a 24-13 victory.
A long home winning streak came to an end for the Farragut High School football team Friday night, Aug. 30, as the Admirals came up on the short end of a 24-13 decision against Knoxville West at FHS’s Bill Clabo Field.

“This is the first time that we’ve lost at home since we’ve had the turf field,” said Farragut senior wide receiver Hunter Shopovick, who had five receptions for 115 yards against the Rebels (2-0).

“It hasn’t happened before on the new field and it sucks that it had to happen my senior year.”

In all, FHS had won 22 straight games at Bill Clabo FIeld before Friday night.

The Admirals will have an extra week to stew about this one because they’ll be off this Friday, Sept. 6, when most of their Region 1-6A foes will open league play.

“Last week (against Bradley Central), we made plays in the second half. Tonight we didn’t make enough plays,” Farragut head coach Eddie Courtney said. “But I think this team is good enough and has enough character that we’ll be OK in the long run.

“But we’ve got to get better each week.”

Against the Runnin’ Rebels, Farragut took a 3-0 lead on Simeon Sharp’s 26-yard field goal with 10 minutes remaining in the second quarter. The kick culminated a 15-play, 64-yard drive that consumed 5 minutes, 26 seconds.

The two teams slugged through a scoreless first quarter, with the Rebels engineering a long drive after receiving the opening kickoff. West drove the ball to the Farragut 23 but came up empty when Tyson Siebe missed a 40-yard field goal.

After the Admirals scored, however, the Rebels would answer, taking a 7-3 lead when Isaiah Mattress scored on a 2-yard run with 3:14 to play in the first half.

Sharp pulled FHS to within 7-6 with his second field goal of the evening, a 39-yarder, at the 1:30 mark of the second stanza.

After halftime, it didn’t take long for the Admirals to gain the upper hand. Matt White’s 48-yard touchdown scamper and Sharp’s extra point made it 13-7 with 9:49 left in the third quarter.

But the Rebels didn’t trail for long. They regained the lead when quarterback Baker Dance connected with freshman Elijah Rogers on a 33-yard scoring strike to make it 14-13 just over two minutes later.

Farragut’s demise came on special teams, as it gave up a long return that set up Siebe’s 26-yard field goal with 4:09 left in the third frame making it 17-13.

The Ads also muffed a punt, setting up Dance’s TD pass giving the Rebels a lead they wouldn’t lose.

“Those two plays really changed the game, especially that punt return,” Courtney said. “We had all the momentum on our side and we gave up the long return.

“We were able to hold them to three (points), but that was still big.”

West put the game away late in the final stanza, as Mattress rumbled 90 yards for a touchdown inside the final two minutes.

West coach Lamar Brown was extremely pleased after the game.

“These guys have really changed their culture,” said Brown, who guided the Rebels to a 4-7 record in 2018. “Last year, we were involved in a bunch of close games like this one and we lost every one of them.

“I’m so proud of the guys on this team.”