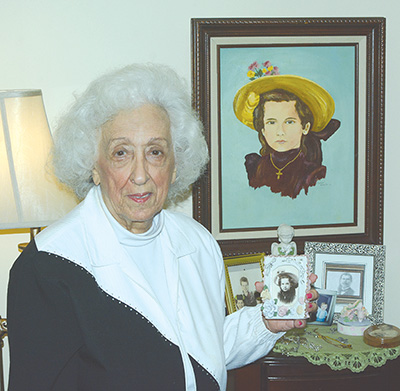 Karen Stilwell holds a small photo of her mother, Lena Siragusa, which she recreated as a painting on the wall in the bedroom of her apartment at Park Place Senior Living Center in Farragut.
Though turning 96 this week, Karen Siragusa Stillwell still has the passion, and skill, to make paint come to life on canvas.

While “hundreds” of her acrylic, oil and watercolor paintings — spanning more than seven decades — are featured in galleries in the San Francisco Bay Area and Knoxville, this highly respected professional artist was most anxious to talk about her people skills.

People skills with the powerful and famous.

During the 1960 Presidential campaign, “I was running the headquarters” in support of John F. Kennedy in Pittsburg, California, “about an hour north of San Francisco,” she said.

With a campaign stop in nearby Martinez, then Sen. Kennedy “came off the train especially to meet me,” Karen said while in her own personal gallery/art studio, which doubles as her apartment home in Park Place of West Knoxville Independent Senior Living Community in Farragut.

“The senator from California who was with him was telling him about me, that I had registered so many new Democrats in three different headquarters,” she added. “So (Sen. Kennedy) came down off the train after he said his speech, in a huge crowd, and I was the only one allowed (in a special designated area).”

Then there was “Ole’ Blue Eyes” along with one of that era’s top award-winning actresses.

“I also met Frank Sinatra,” Karen said. “I was the only one — with my (campaign office) girls — allowed backstage at San Francisco’s Top of the Mark, a big hotel, at a big Tea that they had for the women.

“… There was a table reserved for us right near the stage and Janet Leigh was sitting there, Tony Curtis’ wife,” she added about the popular actress. “She was beautiful and very friendly and very nice.”

Moreover, an event official approached Karen and said, “‘Ms. Basile (then her last name), you’re allowed to go backstage and meet Frank Sinatra,’” she recalled. “‘You’re the only one allowed, you and your girls.’

“We met him, and he was holding me and hugging me and signing autographs for my girls and talking to them,” she added about Sinatra. “He said, ‘I’ve heard about you.’ … He was very nice. The girls asked him a lot of questions.

Also count the great singing legend Tony Bennett among those Karen has met.

“And more that I’m trying to remember — I’m 96,” she added with a laugh before pointing out a May 1979 photo of her with movie/TV stars Burt Reynolds and Loni Anderson, plus famed impressionist Rich Little.

Karen said her transition from the Bay Area to the Farragut area began “maybe 20 years ago” after her son, a highly respected California surgeon, suffered a second heart attack.

“He wanted a slower life so he researched and found Tennessee would be a slower pace for him,” she said. “I kept visiting him then, and my son said, ‘mom, why don’t you move here?’”

But Karen had a daughter “who was 19 when she died” in the Bay Area, “and I felt like I would be leaving her” to move to the Knoxville area.

However, “The last time I visited my son here, I met an old friend of mine … And she said this one thing to me: ‘you’re bringing her soul with you’” when moving here.

“I went home and told my husband (the late George Stillwell), ‘We’ll move whenever you’re ready.’”

Karen’s mother, Lena Siragusa, “Wanted to be an artist” but never did so professionally or publicly, the Park Place resident said. However, “She always drew things in front of me, and I was inspired by her.”

“Then I wanted to be an artist,” Karen added.

She has two grandchildren and one great grandchild.

About her first painting, a bowl of mixed fruit, “One day I was out with some friends and I saw a picture, and I copied it (drawing the outlines) and went home and painted it,” Karen said. “I was married and had two children.”