Support from my friend

A welcome surprise to her life 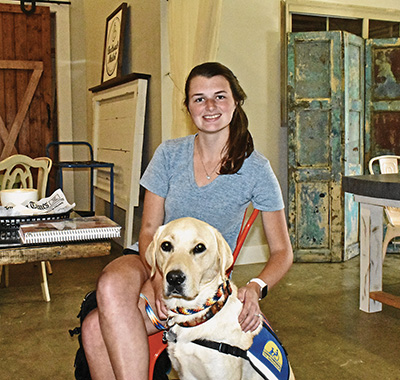 University of Tennessee doctoral student Lauren Armstrong, who is hearing impaired, and her service dog, Elroy, are pictured in one of their favorite hangouts, Backroads Market, just off Sutherland Avenue.
Lauren Armstrong has been fiercely independent for most of her life, so it has been a welcome surprise that a support animal has given her greater freedom.

Born with a profound congenital hearing loss, Armstrong said her new dog, Elroy, a Golden Retriever cross, has “been wonderful” since they were matched in May through the non-profit group Canine Companions for Independence.

“He makes me feel more confident in public settings,” added Armstrong, who recently resumed classes at the University of Tennessee, Knoxville, where she is pursuing a clinical doctorate degree in audiology. “I don’t feel vulnerable that something will happen around me, and I not be aware of it.”

Armstrong has Cochlear implants and was fitted with her first one as a toddler. She also reads lips and has relied on the assistance those aides provided during her years in public school, then as a high school student at Christian Academy of Knoxville.

However, she still had limitations.

“I can’t sleep with my implants,” she said, noting they must be recharged daily, and being without them leaves her vulnerable.

Even when she wears them, they don’t necessarily help her hear what is going on around her at all times. She said she loves to cook, but oftentimes is unable to hear the kitchen timers.

“I have burned a lot of food,” she said with a sheepish grin.

Armstrong also was unable to hear an approaching UT bus one day on campus, and was struck hard enough that she did a

180-degree turn when the bus accidentally jumped the sidewalk.

Those scary incidents, along with the fact that she wanted to be able to be more independent and eventually live on her own, helped her see how she might benefit from a service dog.

She applied with CCI — which trains service dogs free of charge — and worked through the application process before being notified earlier this year she had been selected.

Armstrong attended “human training” for two weeks with five other recipients at CCI’s southeastern headquarters in Orlando, Florida, during which time she was matched with Elroy.

They have been inseparable ever since.

“He helps me, even when I’m driving,” she said. “He sits in the back and ‘looks’ for cars. He lets me know when he hears a siren.

“He also lets me know if my name is called in class. And I’ve been cooking like crazy!” she added.

After that bus scare, she also is happy to report Elroy “alerts me when a bus is coming, too.”

The pair has garnered quite the attention, as they were featured earlier this year in Parade Magazine, in a cover story devoted to support animals.

She said for the most part, Elroy has been accepted in public, but she has encountered some pushback.

“We went to the Habitat for Humanity store one day, and someone told me I couldn’t have Elroy with me,” Armstrong

recalled. “I told them I had

credentials, but they threatened to call the police if I didn’t

“I told them to go ahead,” she added. “You have to stand up for yourself.”

That concept has long been ingrained in Armstrong, who admits to being “very stubborn” about her disability.

“When I was growing up I hated to tell people about it,” she said.

But now she said she is “so glad to be able to talk about Elroy” that she doesn’t mind sharing her own story, too, which includes a devoted financé, Cole Harris, whom she plans to marry in 2021.

“He says I am much more confident now that I have Elroy,” Armstrong said.

Armstrong also is excited about the “God thing” of her decision to pursue audiology.

“Originally, I was going into neurology, even though I had a lot of people telling me to go into audiology,” she said.

“Some things happened to make me realize that is what I should do,” Armstrong added. “I can really have insight that other people wouldn’t, because of my own history.

“I’ve had to be the ‘MacGyver’ person for myself, to work through my own individual problems and find solutions, and I know I can help others because of that.”